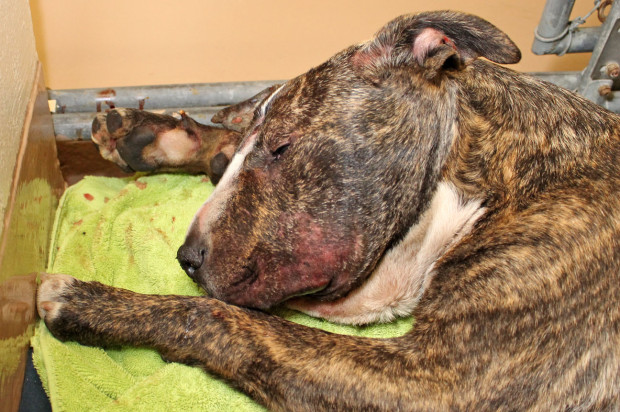 Maximilian, a male pit bull terrier mix that was one or two years old, was euthanized after his kidneys failed, Animal Care and Control spokeswoman Deborah Campbell said.

“The abuse he endured was too severe to recover from,” Campbell said.

Maximilian was euthanized this morning in the presence of his owner, who said the dog was stolen from him early last week, according to Campbell.

“He was heartbroken,” Campbell said. “At least they were together one more time.”

Maddie’s Fund, a charitable organization founded by David and Cheryl Duffield to support pet adoptions and animal shelters, donated a $10,000 reward on Saturday for tips leading to information about Maximilian’s case, according to Animal Care and Control.

Maximilian was found at about 6 a.m. Thursday below the U.S. Highway 101 overpass near South Van Ness Avenue, Animal Care and Control officials said.

His injuries included blunt force trauma to his head, broken and missing teeth, severely injured paws with missing pads and nails and burns from heat sources, including cigarettes.

Animal Care and Control initially offered a $500 reward for information leading to the arrest and conviction of the person or people responsible for Maximilian’s abuse.

Animal Care and Control officials said they are still pursuing leads to find the person responsible.