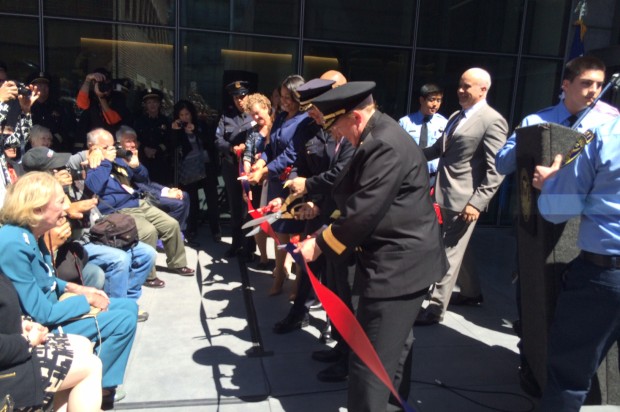 San Francisco police officers gathered with some of the city’s highest-ranking public officials today for a ribbon-cutting ceremony at the newly constructed Public Safety Building in the city’s Mission Bay neighborhood.

The campus is also home to the San Francisco Fire Department’s new fire station no. 4. The fire department’s arson task force has also moved on to the campus to facilitate police and fire department collaboration on arson investigations, officials said.

The Hall of Justice, in addition to being seismically unsafe, has also suffered recently from recurring power outages and HVAC problems.

Lee said the investment in the new campus would allow the city to “honor the men and women who serve us on a daily basis.”

Mohammed Nuru, director of the San Francisco Public Works Department, said today that the new building, which was funded by the voter-approved Earthquake Safety and Emergency Response Bond in 2010, would ensure that the city’s first responders are equipped to better assist the public.

San Francisco Board of Supervisors President London Breed said she is pleased to see that the police department has a state-of-the-art facility and has managed to escape the Hall of Justice at 850 Bryant St., where it has had its headquarters for over 50 years.

“The place is falling apart,” Breed said of the Hall of Justice.

Standing in the front courtyard of the new public safety building today, Breed said, “This is what our public assets should look like.”

Capt. John Goldberg, the police department project liaison for the new building, said the structure is blast and ballistic resistant and can operate off the grid for up to 96 hours after an earthquake or other major disaster.

San Francisco Police Chief Greg Suhr, who has a corner office in the new building, said today that among the technology he is most excited about at the building is video remote interpreting.

Besides the technological advances for the department, Suhr said, “The new facility moved us out of the earthquake-vulnerable Hall of Justice and enhances our capabilities to respond to calls and provide coordinated responses.”

The new building was also designed with energy and cost savings in mind, with features such as solar heating of water, reuse of gray water, rainwater collection for irrigation, a green roof and active chilled beams for heating and cooling of the building, according to police spokeswoman Grace Gatpandan.

The 270,000 square-foot Public Safety Building, designed collaboratively by architects at HOK and Mark Cavagnero Associates, will be among the city’s most seismically safe buildings and is anticipated to have LEED Gold certification.

According to the architects at HOK, the 1920s masonry fire station on Third Street has been rehabilitated for community use, while the new building’s glass exterior provides “an appearance reflecting open government.”

Two public art sculptures have also found a home on the new campus. The Spiral of Gratitude, a 17-foot-tall glass cylindrical structure attached below a skylight stands in the building’s main foyer to honor fallen officers.

Outside the refurbished 1920s fire station stands a 21,000-pound bell that rings three times at noon each day to signal that all is well in the city.