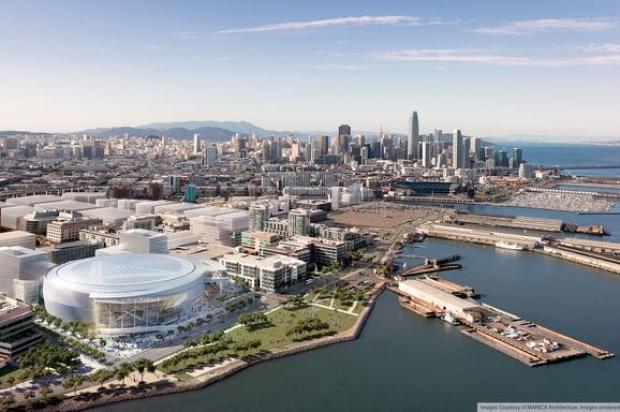 A new group announced its opposition to the Warriors’ planned 18,000-seat arena project today, raising concerns that the arena will heavily impact traffic for the nearby UCSF Medical Center at Mission Bay campus.

“Essentially this stadium will prevent people from getting emergency room access at UCSF and at the children’s hospital,” group spokesman Sam Singer said today. “It will irreparably harm the world’s greatest center of bioscience and biotech.”

But Warriors spokesman P.J. Johnston called the groups’ arguments “phony” and “scare tactics,” questioning whether they had ulterior motives in raising doubts about the arena project.

He said the group, which appears to include wealthy donors with some involvement with the hospital, does not represent the hospital at all. The Warriors have been in productive discussions with UCSF and while the university has legitimate concerns about traffic impacts, those concerns are being addressed, he said.

The city has conducted studies showing that the arena should have no impact on ambulances reaching the hospital and that first responders may have an easier time on event days as there will be traffic control officers dedicated to controlling crowds around the arena, according to Johnston.

He said there are 17 other arenas around the country within a few blocks of a hospital, including in major cities like Atlanta, Brooklyn and Chicago, that co-exist with “no problems at all.”

A major complaint raised by the opposition group is that the arena plan does not provide sufficient parking for events, with only 200 spaces dedicated to the arena itself.

“The parking argument is crazy because there is ample parking,” Johnston said.

The Warriors are also expecting plenty of people arriving for events to take public transit, walk or bicycle to the arena, Johnston said.

The opposition group’s executive director is Bruce Spaulding, a former UCSF vice chancellor who was involved in creating the Mission Bay campus in 2003.

Its president is former UCSF biochemist William Rutter, who went on to form biotech company Chiron, and its secretary is Samuel Barondes, former director of the Langley Porter Psychiatric Institute.

“Stakeholders of UCSF are concerned about the potentially disastrous outcome this proposed stadium could have on three hospital campuses recently opened in Mission Bay,” Spaulding said in a statement. “Unfortunately, the Warriors and the City of San Francisco have not sufficiently addressed the impact of these concerns on the health and safety of the thousands of patients and families who rely on these UCSF hospitals daily.”

But a UCSF spokeswoman was clear today that the group does not represent the hospital or university and said so far they have been pleased with the city’s efforts to mitigate possible traffic problems.

“It remains early in the process and we will continue to be actively engaged. The interests of UCSF are solely focused on protecting patient care and public safety. We are not affiliated with any other organization or group on this issue,” Barbara French, UCSF vice chancellor of university relations, said in a statement.

However, French said university officials remain concerned about the potential impacts of overlapping events at nearby AT&T Park and the Warriors’ arena at the same time.

Singer said when the city releases its final environmental impact report on the arena proposal, which he said is expected in late May or early June, the opposition group will then consider its next step, which could include a legal challenge or possible ballot measure.