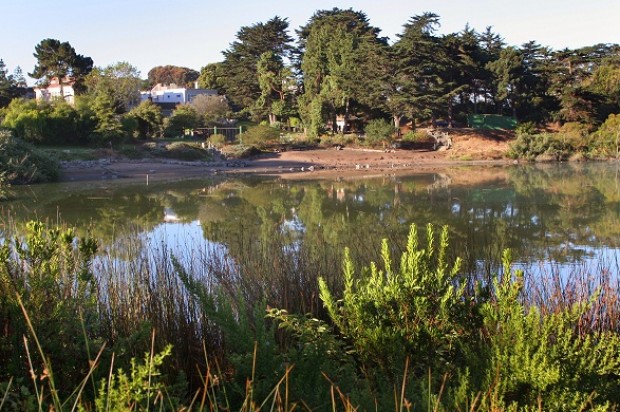 The two groups released several hundred three-spine stickleback fish into the lake, with more native plant and animal species to be introduced this year and in the future, depending on their availability.

Those include, among others, The Pacific chorus frog, the Western pond turtle, California floater mussels and Rough Skinned newts.

Mountain Lake is one of only two natural lakes in San Francisco and is located near the intersection of U.S. Highway 1 and Lake Street on the south side of the Presidio.

The lake’s health declined during the 20th century as U.S. Highway 1 was built through the Presidio and runoff from the road, a golf course and the city damaged the lake’s water quality. Non-native plants and animals also harmed the lake.

The cleanup of the lake leapt forward two years ago when contaminated highway sediment was removed and the lake increased in depth by 50 percent. Presidio Trust spokeswoman Dana Polk said lakes must be a certain depth to be healthy.

That depth depends on the size of the lake, Polk said.

Presidio Trust officials are restoring the lake’s habitat through the removal of non-native fish and plants and the introduction of native plants and animals. As a result the lake’s water quality has improved and the lake has a more natural ecosystem.

“This is a rare opportunity to restore a natural lake in an urban area,” Presidio Trust ecologist Jonathan Young said in a statement. “We hope that research from this project will help lake restorations in other areas of the country and the world.”

Mountain Lake is only one of two natural lakes in San Francisco. The lack of other freshwater lakes and streams in the city makes the habitat of Mountain Lake especially valuable.