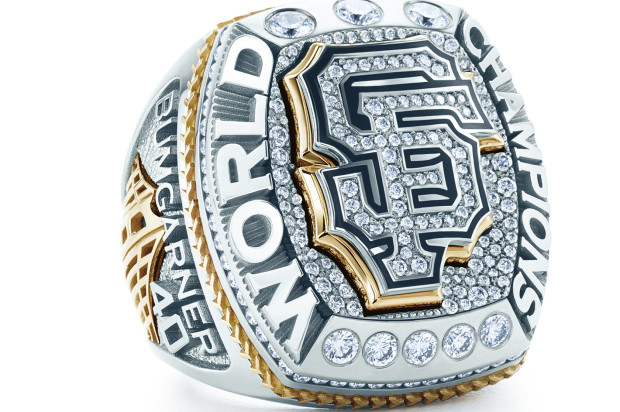 The luster of silver and gold was added to the usual orange and black team colors of the San Francisco Giants on Saturday evening as the baseball team received their championship rings commemorating their 2014 World Series victory over the Kansas City Royals.

For the third time in five years, fans flocked to AT&T Park to celebrate with the home team in a flashy pre-game ceremony that featured live music and all the pomp and circumstance that one would expect with such an achievement.

On the field, the batting circle was festooned with a “World Champions 2014” logo, while the pitchers mound was covered with a blue sign with the words “Tiffany & Co.”-the company that made the rings for the Giants.

On the infield between them stood the three World Series trophies that the team has won since 2010-and in front of the shimmering awards sat five of the franchises’ legendary former players, Hall of Famers Willie McCovey, Juan Marichal, Orlando Cepeda, Gaylord Perry and Willie Mays, all of whom received honorary rings.

Giants’ announcers Duane Kuiper and Mike Krukow acted as emcees for the ceremony, speaking about the importance and symbolism of receiving the World Series rings.

“Baseball has many, many traditions. Many are good. Some are great. But this one-the ring ceremony, may be the very best of them all. It’s the one thing every professional athlete wants-a championship ring. Something they can hold on to, and something they can show off,” said Kuiper.

In a surprise twist, the two announced that the first two rings to be given out would be delivered to the field in a special way-then looked up to the sky above where two parachutists descended into the ballpark and landed in the outfield.

Those first two awards were given to the Giants General Manager Brian Sabean and Manager Bruce Bochy, who then proceeded to hand out rings to coaches, staff, and then the players from the 2014 team, who were all announced individually by Kuiper and Krukow.

The rings, designed and produced by Tiffany & Co., are made of 14k white gold, and feature the Giants’ “SF” logo set in 18k yellow gold with 55 round melee diamonds. On one side, the top is set with three diamonds, while the bottom features five-representing three championships in five years, as well as the eight total that the franchise has won during its existence.

In a statement released by the team, Victoria Reynolds, Group Director of Business Sales for Tiffany & Co. said, “We are thrilled to celebrate with the City of San Francisco and the Giants on another championship season. We are honored to have created the last three championship rings which pay tribute to the Giants’ dedication and performance on and off the field.”

Former Giants Third Base Coach Tim Flannery performed the national anthem, and as a symbol of appreciation for the support of Giants fans everywhere, each player threw out an autographed baseball into the stands for the ceremonial first pitch.

After the ceremony and game, where Giants players wore special gold-lettered uniforms and hats, Giants manager Bruce Bochy reflected on the days’ festivities.

“It was a big day today with the guys getting their rings. They all loved them, too. They’re beautiful rings, it’s just a great night. It was good to see these guys smiling, and it reminded them that they are the World Champions.”