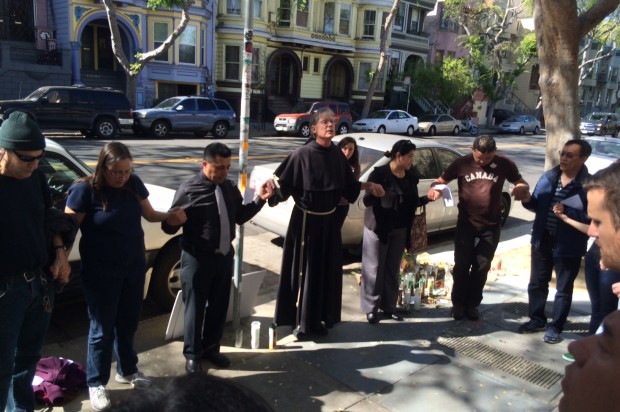 A small group of faith leaders, neighbors and friends held a vigil this afternoon on a tree-lined street in San Francisco’s Mission District where a 21-year-old Guatemalan man was fatally shot by police officers last Thursday night.

The man killed in the officer-involved shooting, identified by community members and friends as Amilcar Perez-Lopez, 21, of Guatemala, was known to be hard working and full of dreams, according to 28-year-old Eduardo Ramon, a friend who worked in construction with Perez-Lopez.

Ramon spoke kindly of Perez-Lopez at the vigil and said the loss of his friend’s life had left him searching for justice.

Ramon, one of the only people at the vigil who said they personally knew Perez-Lopez, said he never knew his friend to be involved in any problems.

He said Perez-Lopez worked hard, was trustworthy and was always looking for ways to help out his family.

Neighbors, including a number of folks who heard the shooting from inside their homes, attended the vigil as well. Neighbors said Perez-Lopez left behind a girlfriend, who was among those that attended a vigil for him over the weekend. He also left behind family in Guatemala, including his mother.

Father Paul Gawlowski, a pastor at the St. Paul of the Shipwreck Catholic Church in the Bayview District said that Perez-Lopez’ blood could still be seen on the street where he was killed by police.

Julio Escobar, director of restorative justice programs at the Archdiocese of San Francisco, said that Perez-Lopez died because police are trained to shoot so they don’t miss their target, but he said that also happens to have the greatest chance of being a fatal shot.

He said he believes that police training needs to change.

“If we don’t change the training, nothing will change,” Escobar said.

One neighbor said he heard everything from his window and was deeply saddened by “this unnecessary death.”

Others called for an independent investigation, saying that police investigating police does not lead to justice.

The vigil comes one week after Perez Lopez was shot and just days after San Francisco police Chief Greg Suhr convened at a town hall meeting to discuss the officer-involved shooting with Mission District residents.

According to police, the night of the shooting, a 911 call came in at 9:44 p.m. and the reporting party told a 911 dispatcher that a male was running with a knife, heading down Folsom Street toward 25th Street. The witness told the dispatcher that the person was chasing after another male.

Police said two plainclothes officers arrived on scene at 9:46 p.m., at which point they allegedly saw a man armed with a knife.

The two officers drew their firearms and ordered the suspect to drop the knife. The officers, who police said had their department issued stars visible on their clothes, fired at the suspect.

At 9:47 p.m. the reporting party told the dispatcher that consecutive shots were heard at the scene.

Suhr said the officers fired at Perez-Lopez a total of six times and then requested an ambulance at 9:48 p.m., however Perez-Lopez was pronounced dead at the scene.

Police allege that Perez-Lopez was attempting to rob a man of his bicycle when the officers intervened, but Perez-Lopez’ former employer described him as someone with money in the bank, who would never have been out trying to steal someone’s bicycle.

Community members also asked the chief for more information about the person who claimed Perez-Lopez was trying to steal his bike.

Neighbors said they saw that man handcuffed at the scene and that police were not explaining why they handcuffed an alleged victim.

While the alleged victim was uninjured during the alleged robbery attempt, community members questioned his innocence and his involvement in the incident.

Following this afternoon’s vigil, the attendees gathered to discuss ways they might be able to help Perez-Lopez’ family with funeral and burial costs once his body is flown back to Guatemala.

Community members were working together to set up a bank account for the family to receive donations from the community.