Transitional Housing Opens to Support Youth at Risk of Homelessness 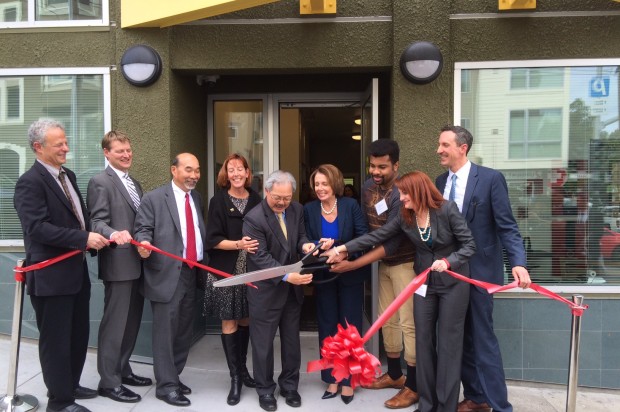 Congresswoman Nancy Pelosi and San Francisco Mayor Ed Lee joined community members this afternoon for the opening of a 24-unit San Francisco apartment building designed to provide transitional housing and social services to at-risk youth between the ages of 18 and 24.

Dennis Jones, a 22-year-old San Francisco native and a tenant at the new supportive housing building, named Edward II, located in Cow Hollow, stood outside his new home this afternoon and tried to envision where he would be without the program.

Jones said if he hadn’t been placed into Edward II, he probably would have had to move somewhere less expensive than San Francisco. It is a prospect which Jones finds incredibly depressing since he’s lived here his whole life.

At Edward II, Jones and the other 23 tenants pay only 30 percent of their income in rent and are welcome to spend 18 to 24 months in the program.

Jones said that through subsidized housing he is able to pursue his long-term goals, instead of working four jobs just to scrape by.

Jones said he is eager to pursue a career that allows him to leverage his strengths and is searching for employment in the fields of social work, law and communications. He is also looking forward to furthering his education.

Jones, a gay black man who grew up in the Bayview District, said he became homeless roughly two years ago when a difference in opinions with his family left him without a place to live.

Jones described his new home at Edward II in the upscale neighborhood as a “very safe and fun environment” where he has his own bedroom and bathroom and everything he needs to eat well, exercise, make new friends and receive educational and career counseling.

All 24 of the supportive housing units are currently occupied with youth who are at-risk of homelessness, many of whom have disabilities or have aged out of foster care. As tenants transition out, new tenants will be referred into the program.

Edward II, named after the inn that formerly occupied the building, is a public-private venture developed by the Community Housing Partnership and service provider Larkin Street Youth Services, in cooperation with the San Francisco Mayor’s Office of Housing and Community Development.

Lee and Pelosi were among those who cut the ribbon outside the supportive housing units this afternoon and who wished Jones and his fellow tenants a bright future.

Lee said the apartments are not only new affordable units added to the city’s housing stock amid a housing crisis, but that the apartments would serve as a refuge for youth as they make strides toward independence.