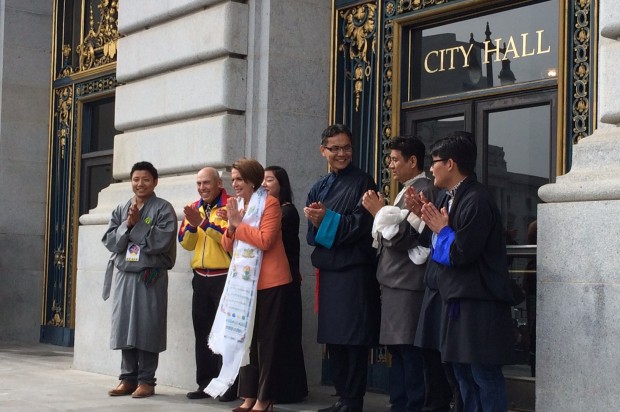 Hundreds of people, including Rep. Nancy Pelosi, gathered in San Francisco today to remember those who lost their lives in Tibet during the March 10 uprisings in 1959 and to demand that the Chinese government uphold human rights in Tibet.

Pelosi, along with San Francisco Sheriff Ross Mirkarimi and Supervisor John Avalos, offered their support for Tibetans while commemorating the 56th anniversary of the Tibetan uprising and paying tribute to the ongoing resistance.

Among the crowd of Tibetan supporters gathered outside of San Francisco City Hall were Deki Wangmo and her 88-year-old mother, Tsering Dolma.

Dolma recounted her escape from Tibet following the uprisings. Wangmo, who was only 4 years old when she left from Tibet on horseback with her family, translated for her mother.

Dolma said she remembers important people were imprisoned and Tibetan flags and money were burned following the uprising. She and her family traveled out of Tibet under the cover of night and hid in a forest. She remembers not being able to light fires for fear they would be discovered during their escape to Nepal.

After arriving in Nepal, her family headed to India before ultimately coming to the United States.

“We cannot go back to Tibet,” Wangmo said, adding that as sad as self-immolations of Tibetan protesters are, she would do the same if she were living under oppression in Tibet.

“It’s unimaginable,” she said, explaining that those who have self-immolated in the years following the 2008 protests in Tibet are pacifists who have refused to fight and are instead killing themselves as a sacrifice for human rights.

Framed photos lined the steps of City Hall today of those who self-immolated by lighting themselves on fire in protest of what they say is the Chinese government’s oppression of Tibet.

According to the Office of Tibet in Washington, D.C., following the mass demonstrations in 1959, China crushed the uprising, leaving 87,000 Tibetans dead in the Lhasa region alone and forcing the Dalai Lama to flee to India.

Pelosi said she remains committed to helping Tibetans secure human rights and dignity and said she hopes the Dalai Lama, who will turn 80 years old soon, will have a long life and that Tibet will again belong to Tibetans.

“We will continue standing up and speaking out,” Pelosi said, adding that she agreed with signs in the crowd that read, “China is responsible.”

Mirkarimi described the 1959 uprisings as a “brutal genocide,” while Avalos condemned the “illegal occupation of Tibet by China” in his address to the crowd.

“We will fight with you to make sure your voice is heard,” Avalos said.

The crowd of Tibetan supporters also heard from Kaydor Aukatsang, representative of His Holiness the Dalai Lama to the Americas.

Aukatsang said the situation in Tibet remains grim and that current conditions are like a war zone.

He urged everyone taking part in the rallies held around the world today not to believe the rhetoric coming out of China that Tibetans are their own masters. He said the Tibetan people are not governing themselves.

Aukatsang said the Chinese government has an opportunity to engage with, instead of attack, His Holiness the Dalai Lama and encouraged dialogue.

Among the chants recited by the crowd as they headed into the street to march toward the Chinese Consulate on Laguna Street were, “Human rights in Tibet” and “China is guilty, guilty of genocide.”

Tibetan supporters planned to march from the Chinese Consulate to Justin Herman Plaza near the Ferry Building, where a candlelight vigil is planned for 5 p.m.