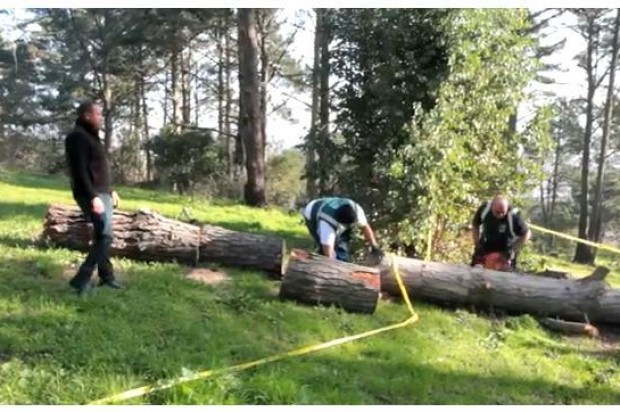 The condition of a San Francisco Recreation and Parks manager who was injured by a falling tree in the city’s Bayview District Tuesday morning has been upgraded to fair, a San Francisco General Hospital spokeswoman said this evening.

The injured man, identified by the Division of Occupational Safety and Health (Cal/OSHA) as Robert Watkins, was described by Rec and Parks officials today as a long-time, dedicated team member. Watkins is listed as a manager on the Recreation and Parks website.

The incident occurred at 9:48 a.m. Tuesday in Hilltop Park. The victim was caught under a falling tree that crews were working on at the time, according to San Francisco Fire Department spokeswoman Mindy Talmadge.

“He was running away from the tree and it got him from behind,” Talmadge said. “It was the canopy that got him.”

Watkins’ coworkers helped extricate him from beneath the tree, and when first responders arrived on scene he was conscious and breathing with a laceration on his head, according to Talmadge.

Peter Melton, a spokesman for Cal/OSHA, said Watkins’ injuries included a broken ankle, torn ligaments, and an unspecified spinal injury involving “chips” to one or more of his vertebrae.

“It looks like he got hurt pretty bad,” Melton said.

Melton said Cal/OSHA has opened a case to investigate the incident, which could lead to citations or financial penalties if that investigation reveals that workplace safety regulations were not followed.

Watkins had experience overseeing crews working with trees. In a YouTube video posted by user SF Park Rec in January, Watkins said jumping in with his staff was his favorite part of his job.

“During the last wind storm my group actually got everything … that was unsafe onto the ground,” Watkins said. “We did not only do that in my area of the city, we actually went around the city and gave help to anyone who needed it.”