Racist, Homophobic SFPD Text Messages Could Lead to Criminal Case Being Thrown Out 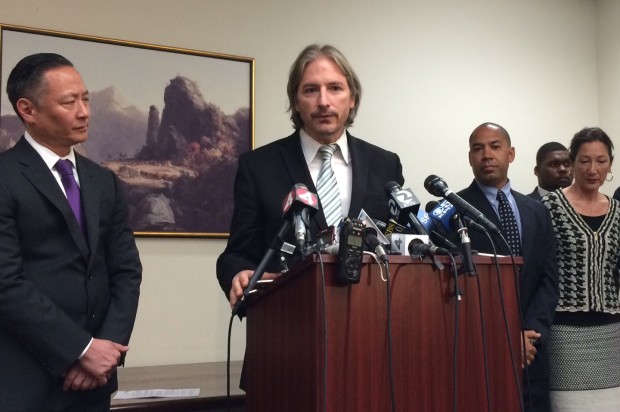 Adachi and his colleagues said today that their office has already identified 120 cases involving two of the four officers and said those cases could get thrown out beginning as early as next week.

District Attorney George Gascon said he was “deeply disturbed by these text messages” and said that “in order to ensure our criminal justice system is fair and equitable,” his office will also be assessing every prosecution in the past 10 years in which the officers participated.

Adachi said its important to go through those cases that the officers touched since the racist statements in the text messages reflect attitudes of hatred that “were not born overnight” and may have impacted their conduct as officers.

Although the four officers who are being investigated were not named by the Police Department, their respective lawyers confirmed their identities are officers Michael Robison, Michael Celis, Rain Daugherty, and Noel Schwab.

San Francisco Supervisor Malia Cohen said today that she is concerned that as many as 10 officers, including a captain, may be associated with the text messages, a sampling of which were released publicly on Friday.

San Francisco Police Department spokesman Albie Esparza said the four officers were reassigned last month to jobs in which they have no contact with the public during a department probe of the messages, which were sent to and from disgraced former Sgt. Ian Furminger’s personal cellphone in 2011 and 2012.

The messages were discovered by the FBI in an investigation of thefts by Furminger and two other officers of money and property seized from suspects in 2009.

Furminger was convicted in federal court in San Francisco in December of four felonies related to the scheme and was sentenced by U.S. District Judge Charles Breyer last month to three years and five months in prison. Furminger resigned from the force after being convicted.

Some of the messages were made public Friday by federal prosecutors in a court filing opposing Furminger’s request to Breyer for release on bail while he appeals his conviction. The FBI previously gave the texts privately to the Police Department.

In Friday’s filing in the Furminger case, prosecutors alleged the messages show the former sergeant was “a virulent racist and homophobe” and argued the judge should take that into account in deciding whether to grant him release during the appeal.

Breyer turned down Furminger’s request for bail during appeal on Monday. He is due to begin serving his sentence on April 3.

The prosecution brief indicates which messages Furminger sent and which were sent to him by officers and other people between October 2011 and June 2012, but it does not name the correspondents. It says the examples are “some of the messages” sent during that period.

Many of the examples include references to the Ku Klux Klan, demonstrate support for white power, and insult black people as well as those of various ethnicities.

“There is no place in the department for bias,” Esparza said.

Esparza said San Francisco police Chief Greg Suhr expects the investigation to be completed within 30 days and that any results showing that an officer was biased “will be forwarded to the Police Commission with a recommendation from the chief for termination.”

Adachi said the issue of bias within the police department goes much deeper and that the department’s culture and training needs to change.

Adachi said he doesn’t know if there are additional messages of this nature or just how many people might be involved in the communications.

Matt Gonzalez, the chief attorney at the public defender’s office said today that, over the years, he has listened to many clients claim that officers lied in their police reports or gave false testimony before a judge.

Gonzalez said that police are called on to testify in court everyday and that people’s lives rely on an officer’s credibility, but he said that these hateful messages “cast a cloud over the officers.”

He said his office is reviewing cases related to these officers to ensure that innocent citizens who came in contact with corrupt officers do not end up behind bars.

Gonzalez said this “horrible behavior” by the officers compromised their cases and that “nobody would want them on the stand” given their bias language in the text messages.

Adachi said, “The messages make clear the utter contempt these officers had for the people they were sworn to protect. You can’t simply set aside this kind of extreme bias when you go to work. It affected who they chose to detain, search and arrest. It affected which witnesses or crime victims they chose to believe.”

Community members who have long been worried about bias displayed by officers patrolling the city streets expressed their concerns at the public defender’s office today.

Nico Bremond, a 22-year-old San Francisco resident and graduate of the University of San Francisco, said he remembers being told as a child that police would look at him differently because he is Latino and African American.

“I’ve witnessed profiling toward myself, my friends, my family,” Bremond said.

However, Bremond said the extent of racial bias by police didn’t hit home for him until his apartment, which he shares with his roommates who are also Hispanic males, was burglarized.

Bremond said he and his roommates reported the incident to police only to be accused by them of dealing drugs.

He pointed to the irony that the one group of people they could call on to help accused them of being criminals.

“It’s a scary thought that there is white supremacy in the police department,” Bremond said today.

De’Anthony Jones, a 22-year-old San Franciscan and a former member of the San Francisco Youth Commission who grew up in the city’s public housing projects, said today he too is worried that the culture of bias runs deep in the police department.

Jones, who is African-American, recalled an encounter with a police officer who refused to shake his hand.

Jones said he hopes to see more people of color on the police force, but said that the hatred displayed in the text messages sheds a negative light on the department, making that goal more difficult.

He said police, much like citizens, have developed a “don’t snitch” culture, in which officers fail to report bad behavior within the department.

The public defender’s Racial Justice Committee co-chairs Christopher Hite and Rebecca Young, released a 10-point plan today, which they think could be a starting point for police reform and transparency in San Francisco.

According to the public defender’s officer, the Racial Justice Committee was formed in 2013 and partners with the University of Pennsylvania’s Quattrone Center for the Fair Administration of Justice to track and remedy racial disparities in San Francisco’s criminal justice system.

Young said she is “saddened and shocked by profound racial hatred” that the officers exhibited and said it highlights a need for police to address officer’s explicit and implicit biases before they impact the community.

Hite said the public defender’s office is calling on the department to provide all officers with training on implicit bias so that they can understand how their personal biases could interfere with their jobs.

The plan also calls for the Police Department to make every effort to assign positions in black and brown communities to those officers who live in the communities they are patrolling.

San Francisco Supervisor London Breed said that she too hopes the city will work harder to bring San Francisco youth into the police department so they can serve the communities in which they were raised.