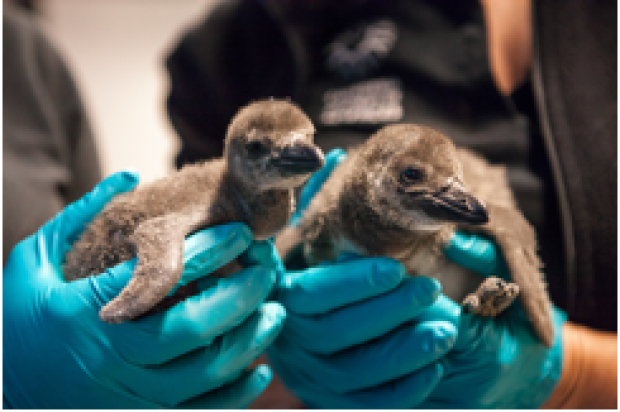 The California Academy of Sciences is asking for the public’s help in naming two African penguin chicks hatched in November, the academy announced Wednesday.

The penguins have been preparing to join the Academy of Science’s 14-bird colony of adults by learning to swim and eat fish from a biologist. Now they just need names.

The academy invited half a dozen local museums to nominate one name each based on their own organizations’ missions and collections. Those include Bert, Bufano or Ebb for the male penguin and Nori, Pina or Stella for the female.

Members of the public can log on to www.calacademy.org/name-a-penguin to cast a vote for one of the names online. Voting will continue for two weeks, and the winning names will be announced March 25.

In 2010, African penguins were classified as an endangered species. As part of their Species Survival Plan, the Academy maintains a collaborative breeding program dedicated to maintaining genetic diversity of the African penguin’s captive population.

They’ve also launched the high-definition Penguin Cam online, so visitors to the Academy’s website can watch live feedings at http://www.calacademy.org/explore-science/live-penguin-cams.