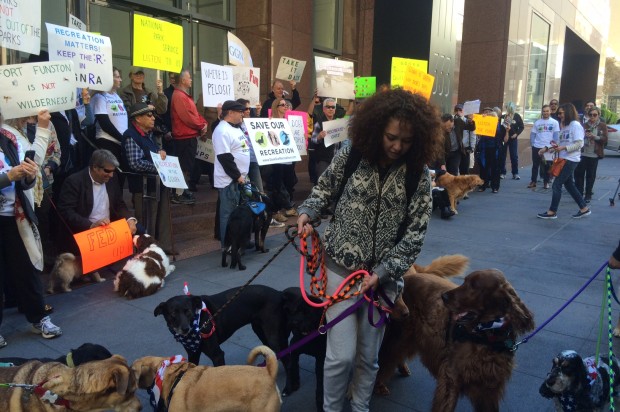 Dozens of dogs and their owners gathered outside the National Park Service offices in San Francisco’s Financial District this afternoon to protest the Golden Gate National Recreation Area’s new general management plan, which they say could prohibit off-leash dogs in the few remaining parts of the park where they are allowed.

Dog owners from around the Bay Area pinned signs to their canine companions, marched outside the offices and chanted, expressing their disapproval of the GGNRA’s new general management plan and urging the GGNRA to give dogs places to run free.

The new plan, which replaces the previous one enacted in 1980 and affects lands in San Francisco, San Mateo and Marin counties, was signed into action by Christine Lehnertz, NPS Regional Director of the Pacific West Region, earlier this year.

The recreation area has seen a large influx in visitors since the last general management plan was created and, the plan aims to provide directions for resource preservation and visitor use in both the GGNRA and Muir Woods National Monument for the next 20 years.

Alexandra Picavet, a spokeswoman for the GGNRA, said today that the new plan “reinforces the importance of both recreation and resource stewardship.”

The new plan was created to bring the recreation area into compliance with federal law, and to deal with the acquisition of new lands in San Mateo County, increased Bay Area demand for access to open spaces and shifts in park visitation and uses. Officials also made use of new information regarding resources, visitor use and climate change, plus local transportation infrastructure changes that have impacted how visitors access the recreation areas.

She said the new plan “identifies recreation as one of the park’s most fundamental resources,” and she maintains that the plan proposes ways to better achieve the GGNRA’s recreation mission while still preserving the park’s beauty and resources.

As for dog walking in Golden Gate National Recreation Area, Picavet said that issue is being addressed through the Dog Management Plan, which has undergone two drafts and remains on the drafting table, where it has been for many years.

Picavet said decisions on where dog walking is permitted in the recreation area are still being determined and that the most recent wave of public comments are still being reviewed and considered by the GGNRA staff.

A draft rule will be issued for public comment late this spring with a final rule and final plan expected in early 2016, Picavet said.

San Mateo County Supervisor Adrienne Tissier joined dog lovers outside the NPS offices this afternoon and explained that she, along with many of her constituents, feel passionately about this issue, and fears that dogs will not be allowed to run off-leash anywhere in the GGNRA lands in San Mateo County, including the beach.

Tissier, who lives in Daly City and has a dog of her own, said she is concerned because there is already a shortage of places that her dog and other dogs can run off-leash near her home.

San Francisco Supervisor Scott Wiener said in a statement today that he too opposes restrictions that will have a negative impact on dogs and their owners. He said further restricting off-leash dog walking in GGNRA will result in more dogs cramming into already crowded neighborhood parks.

Scott, who has a Coonhound named Caleb, said she worries that her dog won’t be allowed at Fort Funston, Ocean Beach or Crissy Field under the still-under-review dog management plan.

Scott said she is also concerned about other recreational restrictions, such as prohibiting fires at Ocean Beach. She said that warming herself by a bonfire on a cold night at Ocean Beach is a San Francisco tradition that she will sorely miss.

She said perhaps the NPS wants to manage urban areas similarly to how they manage Yosemite and other national parks.

“They don’t see the difference between an urban recreation area and those areas,” Scott said.

Scott said she worries that dogs may be the first to go and that walking trails could be threatened next.