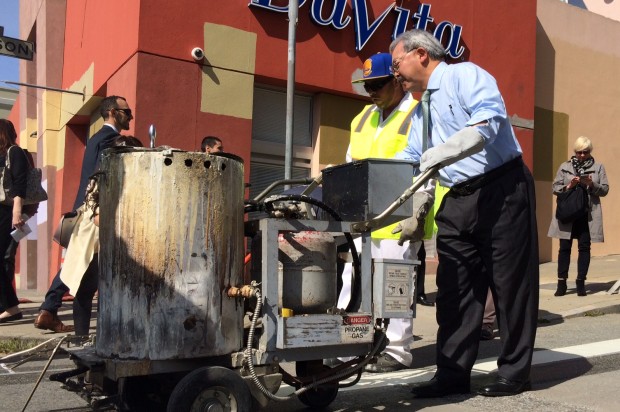 San Francisco Mayor Ed Lee today urged drivers to slow down and look for pedestrians in crosswalks, a day after an 87-year-old pedestrian was struck and killed by a van in the city’s Richmond District.

Lee, Reiskin and Mar all took their turns today laying fresh white zebra stripes at the final intersection to be updated on Geary Boulevard in the Richmond District.

The SFMTA has upgraded 33 intersections on Geary Boulevard with zebra striping to increase pedestrian visibility, according to agency spokesman Paul Rose.

The SFMTA and the pedestrian advocacy group Walk SF have deemed Geary Boulevard as a high-injury corridor in the city.

Shortly after 10:45 a.m. Wednesday, 87-year-old pedestrian Alfred Yee was killed in a collision at Geary Boulevard and 26th Avenue, according to police.

Investigators determined Yee was walking north across Geary Boulevard in the crosswalk when a vehicle made a left turn from 26th Avenue and struck him, according to police.

While the driver of the van stopped and was not cited at the scene, the collision remains under investigation.

“Someone wasn’t paying attention and we have to hold them accountable,” Lee said today.

Nicole Schneider, the executive director of Walk SF, said in a statement today that Yee’s death marks the first pedestrian to be killed by “traffic violence” in 2015.

She said the driver failed to yield to the pedestrian.

According to the SFMTA, these pedestrian safety projects are done being done to support Vision Zero, San Francisco’s goal to eliminate all traffic deaths by 2024.

Schneider said that while Yee was the first pedestrian death in the city, every day an average of three people are hit by cars while walking in San Francisco.

The SFMTA has also implemented a reduced speed limit on Fulton Street, which runs the length of Golden Gate Park from Arguello Boulevard to the Great Highway. The speed limit was reduced from 35 mph to 30 mph, according to Rose.

According to the SFMTA, 12 percent of all San Francisco streets account for 70 percent of severe and fatal traffic-related injuries.

Rose said today that the city hopes to place zebra crossings on all high-injury streets citywide.

Mar said the “culture of speeding” in San Francisco needs to end and hopes that zebra crossing and reduced speed limits, as well as increased enforcement of traffic laws, slows drivers down and saves lives.

Mar said he wants to see the city work together to more quickly implement these life-saving changes across San Francisco before more tragedies unfold.