Appealing TV: The Returned Reboots, Powers Powers-Up, And We’ll Never Be (The) Royals

Banshee Bates Motel Bering Sea Gold King of the Nerds Portlandia Powers The 100 The Bachelor The Returned The Royals The Slap Wuthering High School by Paolo Sambrano | March 9, 2015 8:42 am | in Culture | 0 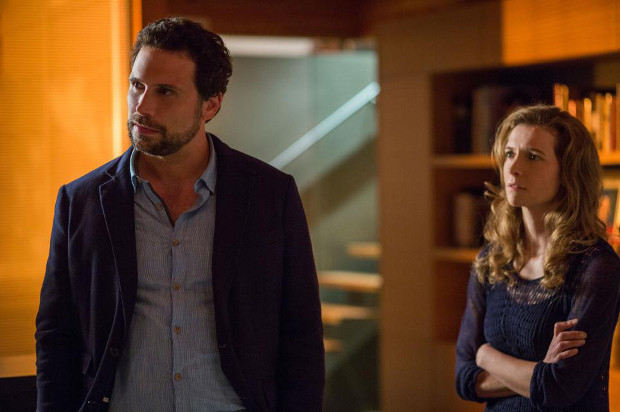 Monday, March 9
The Bachelor (8pm, ABC, season finale)
I guess that’s a wrap on FarmersOnly.com jokes about Bachelor Chris Soules until he and whoever he picks ends up making the rounds on the supermarket tabloid circuit.

Bates Motel (9pm, A&E, season premiere)
Despite a collective eyeroll re mining the past for reboots, the Psycho prequel (or “contemporary sequel,” if you will) morphed into its own creepy, psychosexual drama about the decay of Norman Bates’ sanity and eventual transformation into the serial killer we all know today. It helps that LOST co-Executive Producer Carlton Cuse took on the reins. It also helps that Vera Farmiga turns in an impressive performance as Norma Bates.

The Returned (10pm, A&E, series premiere)
The (original, French) Returned is a spooky and contemplative riff on the well-trod zombie genre. (You can plow through season one on Netflix in a couple of nights.) It also featured a killer score by Scottish post-rock band Mogwai. Long, short of it: the dead come back to a sleepy mountain town, they have no recollection of dying or being dead. They try to pick up where they left off. In A&E’s remake of the show (showran by Carlton Cuse), the pilot is a shot-for-shot remake of the original. Which, while is one of those “we’re dedicated to the original source material” power moves, just gives me pause. Because even if it’s “good” you are looking at the television equivalent of karaoke. But, if you hate reading subtitles and love Jeremy Sisto, this might be up your alley.

We are one A&E Nash Bridges reboot away from making Monday night a Carlton Cuse night, not unlike the Shonda Rhimes’ Shondaland lineup on Thursday nights on ABC.

Tuesday, March 10
Powers (12:01am, Playstation Network, series premiere)
Based on the beloved comic series by Brian Michael Bendis. After a long, harried development process which began at FX, languished in reshoots, Powers ended up on the Playstation Network. Billed as “from the studio that brought you Breaking Bad!” Powers stars District 9’s (and that unfortunate A-Team reboot) Sharlto Copley as homicide detective Christian Walker, a former super hero who ends up partnering with fellow homicide detective Deena Pilgrim (Susan Heyward) as they work superhero and supervillian themed cases. Also starring Eddie Izzard (free feel to restart your ‘bring back The Riches’ campaign) and genre character royalty Michelle Forbes.

Wednesday, March 11
The 100 (9pm, CW, season finale)
The 100’s season two commitment to telling a singular story throughout has been a smashing success (the expanded episode order only sagged the storytelling in a couple of places), and if anything reminded me of how stressful watching a TV show can be week to week. The good kind of stress, like trying to get one last push-up in! Also, The 100 featured one of the most progressive kisses out of left field a couple of weeks ago. One more time for good measure, The 100 is the true successor to Battlestar Galactica.

Thursday, March 12
The Slap (10pm, NBC, new time slot)
This is mainly to let you know that NBC already canceled their Americans knock-off Allegiance. Allegiance? There is no Allegiance here. There is only The Slap.

Friday, March 13
King of the Nerds (9pm, TBS, season finale)
It was only a matter of time before the meta game strategy on King of the Nerds reached levels of MTV’s The Challenge. I mean, it was bound to happen when your reality competition show has geniuses and obsessives as its’ contestants, right? Also worth noting that NASA engineer and Redwood City dweller Kaitlin Spak made it to the final four.

Banshee (10pm, Cinemax, season finale)
Reductiveville, ahoy! But a very good friend who started watching Banshee described it by calling Justified a “thinking man’s Banshee.” The dark horse show created by Alan Ball has carved (figuratively, and literally) itself a niche, mostly for its batshit action sequences, but still worth watching.

Bering Sea Gold (10pm, Discovery, season premiere)
There’s gold in them there seas! Literal gold! Not like crab that one catches and then sells for a lot of money, and it’s like a metaphor, but actual gold.

Saturday, March 14
Wuthering High School (8pm, Lifetime)
It’s a modern retelling (or present day re-imagining, your call TV PR flacks) of Emily Brontë’s Wuthering Heights. This isn’t to be confused with the 2003 MTV modern retelling (or then-present day re-imagining) crack at adapting the novel, or the Wuthering High young adult series. For more information on Wuthering Heights, check out the Wuthering Heights Wikipedia page, and then torrent the 2009 UK adaptation of the novel starring Tom Hardy, Andrew Lincoln, and Sarah Lancashire. Then pretend it’s a sequel to Peaky Blinders, or a prequel to The Walking Dead, or a spin-off of Coronation Street.

Sunday, March 15
The Royals (10pm, E!, series premiere)
Aside from Elizabeth Hurley in the starring role, The Royals is notable for being E!’s first foray into scripted drama. Created by One Tree Hill’s Mark Schwahn, Hurley portrays the Queen of England and what follows is a family drama (or dramer) with heightened stakes, feeding into our obsession with the antics of anybody genetically linked to an antiquated and ceremonial bloodline. This show feels like America teabagging England for us winning the War of Independence over two hundred years ago. Or is it retaliation for British actors taking all the American roles (and accents?) Or is it peak Anglophila manifested into drama fodder for a network known for bagging on celebrities’ wardrobe choices? Either way, you should know the show has already been renewed for a second season, so I’ll be expecting to be writing about this this time next year.