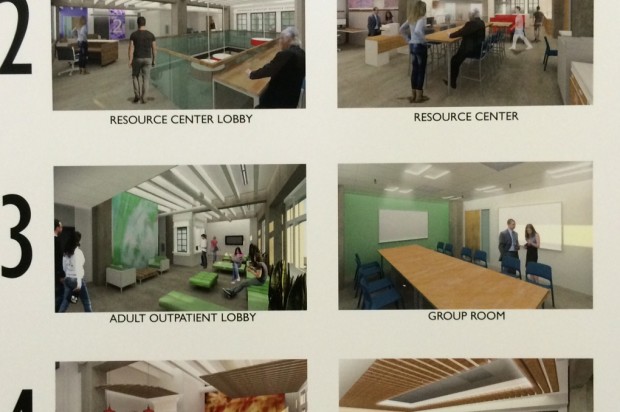 Situated in a former garment manufacturing building, HealthRight 360 will transform the five-story, 50,000 square foot space into a healthcare center.

By the end of 2016, the center aims to offer a 14-room medical clinic, dentistry services, a pharmacy, a substance use disorder treatment intake center and outpatient behavioral health treatment, as well as a resource center where individuals can take GED classes, learn computer literacy, receive job counseling, as well as employment and housing referrals, all under one roof.

The building will enable HealthRight 360 to double its capacity for primary care services in San Francisco.

But before the building opens to the public at the end of 2016, an additional $20 million must be spent on completing construction and preparing the space for clients.

Crawford said that national health care reform has proven vital to HealthRight 360, as the federal government through Medicaid now provides more services to those in need.

Prior to health care reform the Mayor’s Office and the city’s Department of Public Health funded HealthRight 360, but now the property’s mortgage will be paid with federal dollars made available via the Affordable Care Act, Crawford said.

San Francisco Mayor Ed Lee said he is excited for the new services to be made available to the community and said that he hopes more non-profits can follow in HealthRight 360’s footsteps and find ways to connect the needy with vital resources.

Lee said that as economic prosperity and development continues to thrive in San Francisco, he is “working really hard on a shared prosperity agenda” to spread the wealth to all San Franciscans.

Eisen said after going through the new central intake center, homeless individuals, the uninsured, and the socio-economically disenfranchised will have an opportunity to address physical, mental and emotional issues and can seek assistance in securing housing.

Eisen said that the role the Affordable Care Act has played in expanding HealthRight 360’s services should not be downplayed.

The Affordable Care Act “changed the world for our clients,” Eisen said, explaining that previously most clients at Haight-Ashbury Free Clinics, which are operated by HealthRight 360, did not have health insurance and ineligible for Medi-Cal, California’s Medicaid program. Thus, the clinic was receiving little to no payment for its services.

Those individuals are now covered, she said.

Without the passage of the Affordable Care Act, Eisen said, there would have been no groundbreaking ceremony today.