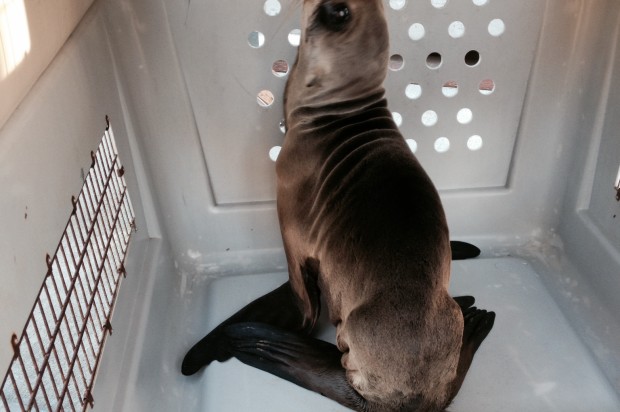 A silky brown California sea lion pup was rescued this morning after being found on the side of the road near Fort Funston in San Francisco.

According to Golden Gate National Recreation Area spokeswoman Alexandra Picavet, two passersby stopped to help the sea lion pup when they spotted it on the edge of Skyline Boulevard just south of the turnoff to Great Highway.

The pup had crossed Skyline Boulevard and was nearing Lake Merced when he was spotted.

At about 7:10 a.m., a National Park Service ranger was driving along Skyline Boulevard when he witnessed the pair trying to protect the pup. The ranger stopped his vehicle and assisted the two good Samaritans on the side of the road, according to Picavet.

The ranger positioned his vehicle in the lane of traffic to ensure no passing vehicles struck the sea lion. The group loaded the pup into a plastic tote for transport.

Picavet said the sea lion was combative during the rescue and even bit the blankets that the ranger was using to guide the pup into the tote.

However, once the sea lion was safely contained, the ranger was able to transport it to the Marine Mammal Center in the Marin Headlands.

The young pup has been named Percevero and is one of 115 California sea lion pups that are being treated at the Marine Mammal Center for being underweight.

Percevero weighs 28 pounds, instead of a normal weight of around 40 pounds, Picavet said.

While there are no visible injuries, the sea lion pup is receiving medical assessment and treatment at the Marine Mammal Center, according to Picavet.

A veterinarian at the Marine Mammal Center will examine the pup later today.

According to the Marine Mammal Center, this is the third year in a row that the center is seeing unusual numbers of sea lion pups stranded and starving.