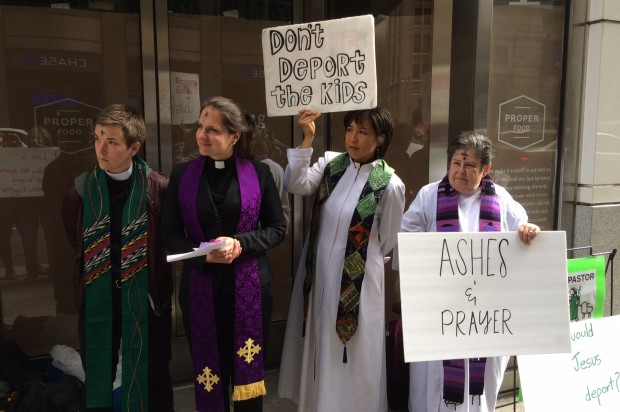 A group of activists and clergy members gathered on a busy sidewalk in San Francisco’s Financial District today to urge the community to help protect immigrant children and families who are facing deportation following a temporary injunction issued by a federal judge on Monday.

The handful of faith leaders and members of the Interfaith Coalition for Immigrant Rights gathered in front of the Immigration Courthouse at 120 Montgomery St. around noon today for an event marking the Christian holiday of Ash Wednesday. They placed crosses of black ash on the foreheads of the faithful as families, many with youngsters, passed by on their way to their afternoon immigration court hearings.

Today’s ceremony and rally was held in response to a temporary injunction issued Monday by U.S. District Judge Andrew Hanen of Brownsville, Texas, in a lawsuit filed by Texas and 25 other states challenging executive actions on immigration announced by President Obama last year.

Unless overturned on appeal, the judicial order will remain in effect until a trial or further court order on the lawsuit.

The injunction blocks two actions protecting certain groups of immigrants from deportation. One of the two actions blocked by Hanen would have expanded an existing program, known as Deferred Action for Childhood Arrivals, or DACA, which postpones deportation for undocumented immigrants who arrived in the United States as children.

The U.S. Department of Homeland Security was due to start accepting applications today for the expanded program, which might have applied to an estimated 270,000 people nationwide.

The existing DACA program applies to people who are younger than 31 years old as of June 15, 2012 and arrived in the United States before June 2007. About 636,000 people have received deferred deportation and a renewable two-year work permit under that program, according to Hanen’s ruling.

The injunction does not affect applications for the existing DACA program.

However, the now-blocked DACA expansion would lift the age requirement, apply to people who arrived before 2010 and defer deportation for three rather than two years at a time.

The second program blocked by Hanen’s injunction is known as Deferred Action for Parents of Americans, or DAPA, and was due to begin in May.

DAPA, if unblocked, would provide deportation protections for an estimated several million people who have lived in the United States for at least five years and are parents of citizens or legal residents.

Among those attending the rally outside the courthouse was Rev. Deborah Lee, the director of the Interfaith Coalition for Immigrant Rights.

Lee said between 60 and 80 families have deportation hearings at San Francisco’s Immigration Courthouse each day and that the injunction will hurt many of those families.

According to Lee, today is an important day to show support for families facing deportation, not only because today marks the beginning of the Christian holiday of Lent, but because if the injunction had not been put in place, many families would now be able to apply for the expanded Deferred Action for Childhood Arrivals.

Lee said she hopes President Obama will take urgent actions and administer an emergency stay in response to the federal judge’s decision.

“Our neighbors are being deported,” Lee said, as numerous Spanish-speaking families walked into the courthouse building.

She said many people facing deportation have legitimate reasons for seeking asylum, but are being removed regardless.

Lee altered popular hymns and led a chorus of activists outside the Immigration Court today.

Among the changed lyrics to the song “He’s Got the Whole World in His Hands”, were “She’s got the migrant families in her hands” and “She’s got the immigration attorneys in her hands,” which provoked smiles and laughter from passersby on their lunch breaks.

Clergy members and supporters of Obama’s immigration reforms held signs that read, “Don’t Deport the Kids” and “All Families are Sacred.”

Rev. Anna Lange-Soto, a vicar at Iglesia El Buen Pastor in Redwood City, said she felt compelled to come out today to protest the judge’s injunction.

Lange-Soto said another executive action is needed to protect those who came to the United States as refugees over the summer, and who are now facing deportation.

She said many young immigrants were promised a future and told they should come out of hiding, but with this reversal their lives in the United States are in jeopardy.

“They’re turning themselves in on some level. Doing this stop-go thing is cruel,” Lange-Soto said.

Tom Pack, a 29-year-old San Francisco resident and an attorney, who attended the rally with members of his congregation, said many people who would have been applying for the president’s new program are now unable to do so as a result of the injunction.

Speaking as a man of faith and church elder, Pack said he hopes Americans who consider themselves Christians and who favor stricter immigration laws think about the human consequences of those laws and how they impact those who are fleeing violence.

While the appeal is pending, the U.S. Department of Homeland Security has halted plans to implement the two programs.