City Workers at De Young, Legion of Honor Protest Use of Fingerprinting Technology 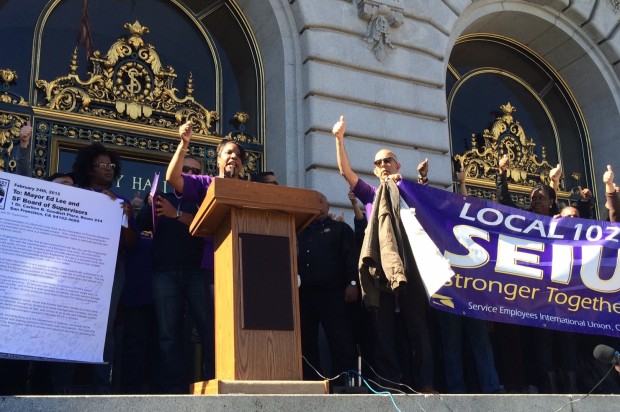 San Francisco city employees working at the de Young and Legion of Honor museums rallied at City Hall today to protest use of their thumbprints in biometric authorization, voicing concerns that a cyber hack could irretrievably comprise their personal information.

Many city workers at San Francisco museums, represented by Service Employees International Union Local 1021, have said that they don’t want their thumbprints given to a third-party contractor to be used in clocking and out of work, as it could make their private information more vulnerable to cyber hacking.

Unlike a credit card or Social Security number, union members said that they would not be able to get new thumbprints should their information be hacked.

Workers said today that their biometrics shouldn’t be given to a contractor as a condition of employment.

After rallying outside City Hall this afternoon, workers went door-to-door to the offices of the members of the Board of Supervisors and Mayor Ed Lee with a petition of 1,700 signatures, urging them to protect the employees’ privacy and sensitive personal information.

In a letter to San Francisco Mayor Ed Lee and the Board of Supervisors, union members and staff explained that, “a biometric clock is a violation of employees’ rights to personal security and serves to foster a surveillance culture.”

Furthermore, the letter states that, by forcing city employees to give their fingerprints “under pain of discipline, insubordination and possible termination,” the Fine Arts Museums has violated the San Francisco Administration Code, which states that the city cannot disclose employee’s private information unless specifically authorized to do so.

If the goal is to improve payroll accuracy, museum workers said they would be happy to clock in with a magnetic swipe card or type in their city-issued Disaster Service Worker ID number.

In addition, union workers said that questions of identity could also be addressed by reviewing the security footage of the time clocks.

City workers say the director of human resources and administration at the Fine Arts Museums of San Francisco, Charlie Castillo, is a main proponent of the program, but that he himself has no plans to use biometrics for time cards. Other top-level museum personnel will also not have to use the biometrics.

Raina Johnson, a San Francisco resident and security guard who works the night shift at the museums, said she feels intimidated by the museum administration, as at least one person she knows of has lost their job when they refused to release their biometrics to the third party.

Johnson said it seems unwise to hand over irreplaceable personal information at a time when Sony Pictures Entertainment, retail company Target and even the U.S. State Department, have recently been hacked.

“Everybody’s getting hacked these days,” Johnson said. “Once your fingerprint is out there you can’t get it back.”

San Francisco Supervisor Eric Mar spoke to the crowd that gathered in opposition to the biometric authorization today and said he too is concerned about the issues raised by fingerprinting and that he also felt it invaded workers’ privacy.

Mar said he is working to draft a resolution that would explicitly require city departments to receive consent from employees before giving their biometrics to a third-party contractor.

Mar said with so many companies and organizations being hacked, city employees need to be able to decide for themselves whether they want to give their biometrics to a third-party contractor.

“We don’t know what the hell they would do with it,” Mar said.

Mar said that he couldn’t understand why the museum wanted to use biometrics in the first place, since there was no known evidence that workers were stealing time.

Security is important, but not at the expense of workers, Mar said, adding that he fears the questionable practice could spread to other city departments if it were to go unchecked.

Some workers said they felt they were being criminalized and wanted to know why other museum employees weren’t required to give their biometrics as well.

“If biometrics is so great, why don’t the bosses participate?” union workers chanted as they marched through City Hall.

Speaking specifically about Castillo, union members chanted, “If our fingerprints get hacked, will Charlie get sacked?”

Rebecca Rozewicz, a museum security officer at the de Young, who has worked at the museum since 1996, said she too felt the museum administration tried to intimidate her when they sent her home in August after she declined to use the thumbprint technology to clock into work.

“I’m entrusted with billions of dollars of art, but not to clock in and out on time,” Rozewicz said.

She said that while she eventually caved to her superiors, out of fear that she would lose her job, SEIU Local 1021 intervened and managed to halt the biometric authorization program for city workers at the museums through mediation.

Rozewicz said that, unfortunately, employees of the museum’s non-profit branch, which hold jobs such as ticket sales and membership assistance, are not under a city contract and have had to clock in and out with biometric authorization for roughly a year.

She said some workers feel they will be penalized if they try to opt out or if they protest with a union.

Rozewicz said she took a vacation day today to come down to City Hall, because she doesn’t feel legislators are hearing her voice.

“Some how City Hall is getting the message that we’re okay with this, but we’re not okay with it,” Rozewicz said.