Bring On The Dancing Boys: Newsies 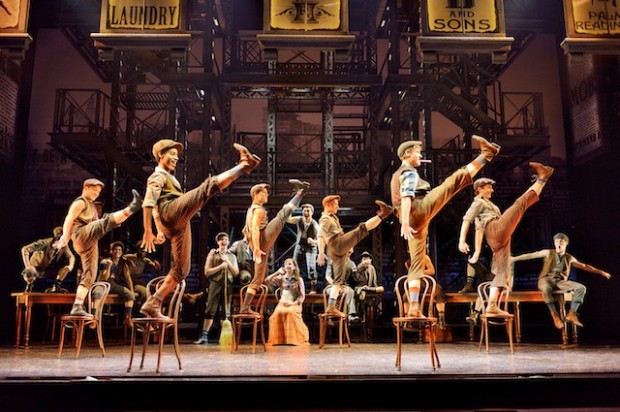 I’m about ten years too old to have been overcome with Newsies fever in the early 90’s, but will admit it’s always seemed an odd phenomenon. A Disney movie musical that flopped upon initial release, but gained a huge following on video and subsequent airings on the Disney Channel? And it’s about turn of the 20th century New York news boys? Who go on strike? And Christian Bale sings and dances? WHUT?

In retrospect, it kind of makes sense. It’s filled with a cast of dozens of cute boys in newsboy caps and knickers, who despite the New Yawk accents are about as threatening as your average boy band. Of course tweens loved it.

The stage musical is also a Disney production, and like the movie, I imagine the key attraction is the large cast of dancing boys (although, most seem to have past their teens years by a while ago). There’s so many of them, it can be hard to keep track of who’s who but I do know this: Jack Kelley (Dan DeLuca) is the defacto newsie leader, and Crutchie (Zachary Sayle) is the one with the crutch.

The industrial set, made up of steel stairs, runners, and scaffolding, rolls around the stage to create the various settings including the slums, newspaper headquarters, a vaudeville theater, and rich newspaper tycoon Joseph Pulitzer’s office. While the plot involves price gauging, child labor, unions, and strikes, it’s presented rather simply: the newspaper bigwigs decide to increase the cost of the “papes” they sell to the newsies by 10 cents per bundle, and the newsies, already poor and virtually homeless, fight back by going on strike.

Yes. This is a socialist musical, centered on child workers, produced by Disney. My head nearly exploded too.

There’s a subplot about a young reporter named Katherine (Stephanie Styles) who falls in love with Jack Kelley while writing about the boys, but frankly, I found their story kind of snoozeville. The musical is at its most fun and entertaining when the large cast of newsies are doing their group dances, which often include moments of tap, and lots of leaps and somersaults, all perfectly synchronized.

The musical’s highlight is probably “Seize the Day,” which features an ingenious use of newspapers as dance props, (and provides super fans a change to seize some of those papes, as they’re tossed into the audience). And while some of the slower numbers are pretty enough, (“Santa Fe;” “Something to Believe In”), I found myself wishing those songs would end so we could get back to some newsie dancing.

That’s one advantage those young movie fans had back in the 90’s: a fast forward button.