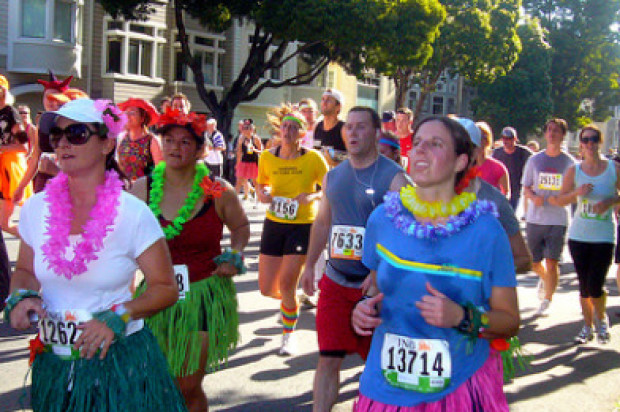 San Francisco’s annual citywide Bay to Breakers footrace and costume party will also be an opportunity for this year’s participants to break as many wacky world records as possible, according to the race sponsor.

The online shoe and apparel shop, Zappos.com, announced this week that not only will they be the title sponsor for the race on May 17, but that the theme of the race will be “Bay to Breaking Records.”

According to Zappos’ chief executive officer Tony Hsieh, in addition to the fun costumes and challenging footrace from the San Francisco Bay across the city to the Pacific Ocean, this year there will also be an attempt to set the world record for “Most World Records Set During a Road Race.”

With more than 50,000 people expected to participate in the race, plus hundreds of thousands more spectators, Zappos is encouraging everyone to work together to set an additional 40 world records on race day.

Yellow-jacketed officials from RecordSetter.com will be on-site adjudicating world records throughout the course.

Among the record setting examples suggested by Zappos to get racegoers’ imaginations going: Largest group to bite a loaf of sourdough at once.

The most creative, fun, and weird record submissions will be announced one week prior to the race.