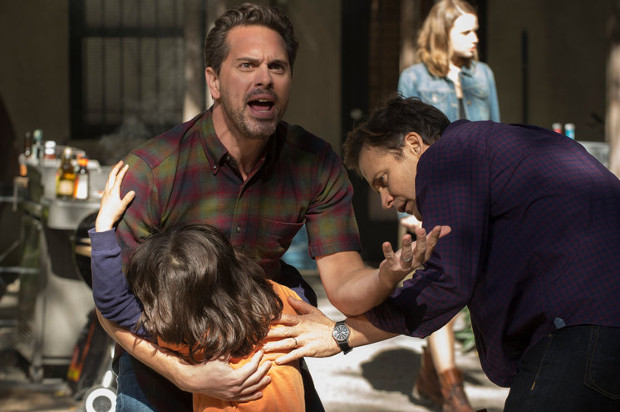 If you’re hoping to wow your valentine on Valentine’s Day with TV, you’re not going to get very far.

Monday, February 9
Better Call Saul (10pm, AMC)
We can’t have a spin-off to one of the most talked-about shows in the Golden Age of Television cut into Chris Hardwick talking to CM Punk and Yvette Nicole Brown about symbolism in The Walking Dead, so Better Call Saul will be on Monday nights at 10pm for its run.

Tuesday, February 10
Amish Mafia (9pm, Discovery, season premiere)
Last season of the purported documentary series about an “Amish mafia” ended abruptly as the show’s star, Lebanon Levi, demanded that production on the show cease immediately on the penultimate episode of last season. That meant last season’s finale was a hodgepodge of interviews and blurred out faces. Although, let’s be honest, it’s just as likely that Discovery is up to their new-old tricks of setting up a staged reality and passing it off as true (to borrow a term from professional wrestling, they are totally kayfabe). This show was way more damaging to the Amish community than Weird Al’s “Amish Paradise” ever was.

Wednesday, February 11
Fresh off the Boat (8pm, ABC)
ABC’s Wednesday night family sitcom night’s dance card is already full, so Fresh off the Boat will be moved to Tuesdays at 8pm, as a lead-in to Agent Carter/the return of Marvel’s Agents of SHIELD.

Schitt’s Creek (10pm, POP, series premiere)
Leave it to Canada to fill the gaps in your television programming needs from sitcoms to sci-fi shows shot in Vancouver. POP is the rebranded ghost of the TV Guide Channel (in a collaboration with CBS and Lions Gate Entertainment), and among their new slate of non-TV listing programming is Canadian import Schitt’s Creek. Created by Eugene Levy and his son Daniel Levy, Schitt’s Creek is a riches to rags tale about a formerly wealthy family whose only remaining asset is the small town of Schitt’s Creek (which they bought as a joke). Chris Elliot is also in it!

Thursday, February 12
The Slap (8pm, NBC, series premiere)
What did the five fingers say to the face? Find out on NBC’s The Slap!

This is actually a remake of the Australian drama of the same name (which aired on DirecTV a couple of years ago, and is the adaptation of the novel, also of the same name). A stacked cast (Peter Sarsgaard! Uma Thurman! Thandie Newton! Zachary Quinto! Brian Cox!) that all must be in need of house extensions, The Slap is what happens when a child is hit with the titular slap. It will take an entire season to tell what Black-ish did in one episode!

Friday, February 13
Bosch (12:01am, Amazon, entire season premiere)
As a quick aside, aside from Shawn Ryan’s Mad Dogs, and the adaptation of Man in the High Tower, the latest crop of Amazon pilots all feel like they are all hitting the same beats of X verbs Y but is Z. While maybe it’s more indicative of how weird pilots are, it has me wondering if Amazon’s shotgun approach is by design. And if it’s merely just a showcase of whatever actor of note they can get at the time (Ron Perlman as a judge who ends up thinking god is telling him to go vigilante justice?) Bosch is one of the latest crop of Amazon pilots to make it through the Battle Royale. Based on Michael Connelly’s series of best-selling novels, it stars Titus Welliver (the Man in Black from LOST) as a murder police trying to solve the murder of a thirteen year old boy while standing trial for the murder of a serial murderer. Murder.

Saturday, February 14
Animals in Love (9pm, Animal Planet)
Well, if you aren’t going to ever find love, at least watch animals that are in love.

Sexy Beasts (10pm, A&E, series premiere)
A&E’s adaptation of the British dating show of the same name is having a season burnoff on Saturday night to remind you that dating is awful, awful, business and if you’re in a relationship stay, because good luck being single. The premise of the show is that the contestants are all made up in Hollywood grade prosthetics (think SyFy’s Face Off) before all going out on a group date. The theory is that with looks out of the equation (looking like a sexy blue space alien or something) it will be easier for our episode mark to choose a partner, when that partner looks like an Animorphs book cover.

"Sexy Beast Sizzle" for A&E from Arun Venkatesh on Vimeo.

Sunday, February 15
Mulaney (7pm. FOX, series finale)
Oh Mulaney. Your quest to bring back the laugh-track three camera sitcom just wasn’t meant to be. And maybe the people didn’t get it was a slight jab at the entire convention either! After being shuffled from NBC to FOX, a Sunday night spot, to switching time slots with Bob’s Burgers, to cast changes, Nasim Pedrad leaving SNL. It’s all come to a series finale on a 7pm on a Sunday, a mere hour before the Saturday Night Light 40th Anniversary Special. You are still hilarious John Mulaney. I’m gonna put twenty-one dollars worth of What’s New Pussycat on a diner jukebox in your honor.

Saturday Night Live: 40th Anniversary Special (8pm, NBC)
The seminal sketch comedy show celebrates its fortieth year with the return of old cast members, and given what’s been going around the last few days, Sarah Palin is bound to make an appearance.