Appealing TV: CBS Makes It Odd, Vikings (The Show, Not The Eventual Eye-Rolling Diet Fad), And White Men Who Make Movies Getting Awards

139th Westminster Kennel Club Dog Show QI Repeat After Me The 87th Annual Academy Awards The Book of Negroes The Jack and Triumph Show The Mentalist The Odd Couple Vikings by Paolo Sambrano | February 16, 2015 9:35 am | in Culture | 0 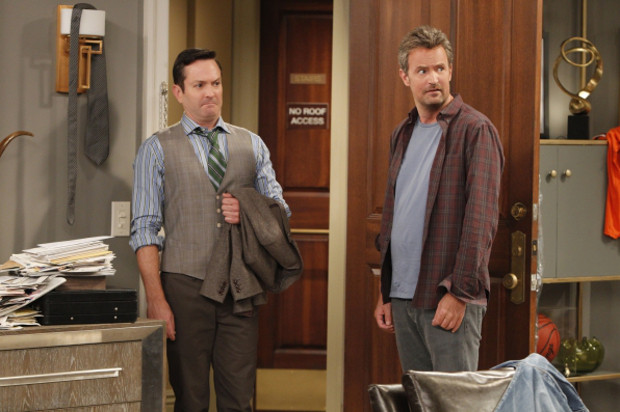 Monday, February 16
The Book of Negroes (8pm, BET, miniseries premiere)
The six part, three night miniseries The Book of Negroes is BET’s first foray into different ways of programming things of note. Based on the novel of the same name by Lawrence Hill, the miniseries tells the story of Aminata Diallo, from her enslavement at a young age to eventual liberation. Cuba Gooding Jr. and Louis Gossett, Jr. and Aunjanue Ellis star.

Repeat After Me (8:30pm, ABC, series premiere)
Tuesday nights on ABC just got weird. While you have the very strong Fresh off the Boat, and the winding down of Marvel’s Agent Carter (and return of Agents of SHIELD coming up), stuck in the middle is a hidden camera reality series hosted by The Goldbergs star Wendi McLendon-Covey (who will always be Deputy Sergeant Class I Clementine “Clemmy” Johnson to me). The show is based on a similar segment on The Ellen DeGeneres Show (which explains why Ellen DeGeneres is executive producing). Celebrities in hidden camera situations repeating funny lines McLendon-Covey are feeding them, because celebrities can be silly too! Ellen Pompeo, Taye Diggs and Harry Connick Jr. on the pilot episode.

Wednesday, February 18
The Mentalist (8pm, CBS, series finale)
Much like FOX’s Bones, I was surprised to find this show was still on. Perhaps the domain of couples (at least according to what Party Down tells me about the viewing habits of those in relationships), the show about the guy who solves crimes by using his mind to read people comes to a close, nearly seven years later.

Thursday, February 19
QI
In the, “it’s probably new to a lot of people, so shut up if you’ve seen it already” department, BBC America is airing episodes of the Stephen Fry hosted quiz show, that’s not so much a quiz show but parade of British people of note being witty. If you’re wondering, QI stands for “Quite Interesting,” and it doesn’t matter if you’re wrong, just for Christ’s sakes don’t be boring when answering.

The Odd Couple (8:30pm, CBS, series premiere)
What this is? Is there a Mobius Strip of popular culture where all this has happened before, and all this will happen again? Matthew Perry and Thomas Lennon take on the roles inhabited by Tony Randall and Jack Klugman from 1970 to 1975. One slob, one snob. Both odd together. Worth noting: Yvette Nicole Brown left Community to join this show’s cast.

Vikings (10pm, History, season premiere)
History Channel’s successful exercise in reverse engineering Game of Thrones for the basic cable crowd (and those without access to their parents’ HBOgo accounts) returns for a third season. Still within History Channel’s branding (though not about pawning off Civil War peg legs), Vikings duly takes advantage of history’s wide breadth of tough people with pointy items scheming against each other.

Friday, February 20
The Jack and Triumph Show (11:30pm, Adult Swim, series premiere)
Dare I say triumphant? Dare I say triumphant? The (triumphant) return of Jack McBrayer and Triumph the Insult Comic Dog to the shores of Adult Swim. The duo star as former child actors who starred in a Lassie-esqe series in the 80’s and 90’s who proceeded to deep dive into decadence and debauchery. While Jack was able to get his life back on track, Triumph finds his way back into Jack’s life. Also worth noting, while at the winter TCAs, Triumph got his kicks in with prolific HitFix television critic Alan Sepinwall with, “What’s Alan Watching? Not his weight!”

Saturday, February 21
Babysitter’s Black Book (8pm, Lifetime)
Oh, good old Lifetime. When you’re not making biopics about dead celebrities, I can always count on you to make movies with premises that seem to be rejected pitches for pieces on Dateline. When a high school girl realizes she can’t afford college, she pivots her babysitting service into an escort service for dads, but the small minded people in her suburban community end up slut shaming her because she found a way to monetize her sexuality in order to buy into a stupid fucking system that drains graduates dry.

Sunday, February 22
The 87th Annual Academy Awards (5:30pm, ABC)
Which straight white man will be recognized for their achievement in disseminating mass culture on a dying platform? But please let this be the last we ever speak of the Mani-cam. At least Neil Patrick Harris is hosting! And The Lonely Island and Tegan and Sara will be performing Everything is Awesome from The Lego Movie. That’s pretty well, awesome, no?