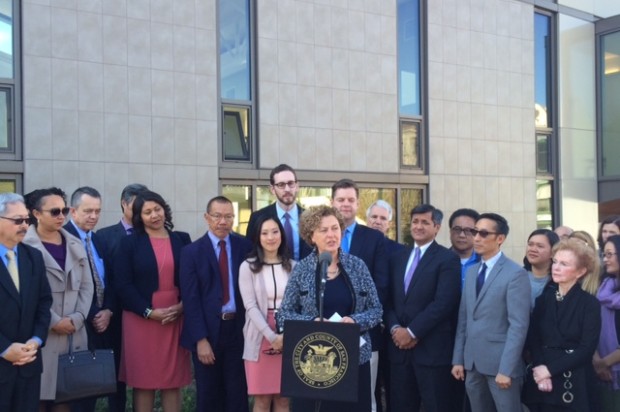 The mayor announced his decision to appoint Christensen at a news conference this afternoon outside of the new North Beach branch of the San Francisco Public Library, a project he credited Christensen for helping to bring to fruition.

District 3 covers a diverse array of neighborhoods such as Fisherman’s Wharf, Chinatown, the Financial District, Union Square and North Beach, among others.

Lee said Christensen, a North Beach resident of 21 years and a San Francisco resident of 35 years, is the owner of a product development and design strategy consulting firm who has acted as a political activist in the city for many years.

Christensen has been an active proponent of pedestrian safety projects and the extension of the Central Subway, Lee said.

Christensen said today that she would continue to improve the district’s parks and open spaces as well as ensure that visitors and residents alike see improved transportation infrastructure in the district.

She is a member of San Francisco Planning and Urban Research (SPUR) advisory board as well as a founder of SF NexTstop, an advocacy group supporting the extension of the Central Subway to North Beach and Fisherman’s Wharf.

Lee said it was Christensen’s “spirit and commitment” that led him to choose her to fill the vacancy on the Board of Supervisors left by former board president David Chiu, who was elected to the state Assembly in November.

“It was not my original intention to go into politics,” Christensen said today, adding that she feels it is in fact the best way for her to ensure that important improvements are made in the district.

Christensen said that while this will be her first position in public office, she has been working side-by-side with City Hall for 20 years.

“I’ll work very hard for you,” she said to residents today as she accepted her new position. “If I make a goal, I get it done.”