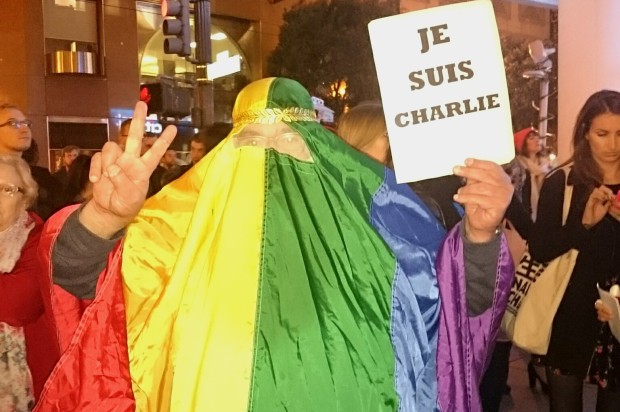 Hundreds gathered at the French Consulate in San Francisco this evening in honor of the 12 people murdered today in an apparent terrorist attack at the offices of French satire magazine Charlie Hebdo.

The crowd gathered in front of the consulate at 88 Kearny St. holding signs that read “Je Suis Charlie,” or “I am Charlie,” to show solidarity with those killed.

Signs saying “We Are Not Afraid” were taped to lampposts in the area, and the crowd alternated between silence and breaking into chants and song.

Those attending brought pens to raise “so the world can remember we’ll fight for freedom with ink, not blood, just as Charlie Hebdo did and will continue to do,” organizer Stephane Rangaya said in a statement on the event’s Facebook page.

“I’m here because I’m French and I’m for freedom, and I’m against the horror that just happened in Paris,” said Blanche Crabe, a Corte Madera resident attending the vigil.

“This is terrible, it’s touching all of us, and we cannot accept it, we have to go into the street and protest against it,” Crabe said.

Similar vigils have been held in Paris and other locations around the world today.

San Francisco Police closed off Kearny between Geary and Post to allow the overflowing crowd to spread into the street.

Masked gunmen stormed the offices of satirical newspaper Charlie Hedbo and shot and killed 12 people, including editors, cartoonists and police officers, and wounded 11 others. The attack appears to have been made by Islamist extremists upset over the paper’s depictions of the Prophet Mohammed.

People can leave a note of condolence for the victims at presse-info@consulfrance-sanfrancisco.org, or can sign a condolence book tomorrow at the French Consulate, located at 88 Kearny St., Suite 600, from 9 a.m. to 12:30 p.m.