Free Muni to be Offered to Disabled, Low- to Moderate-Income Seniors 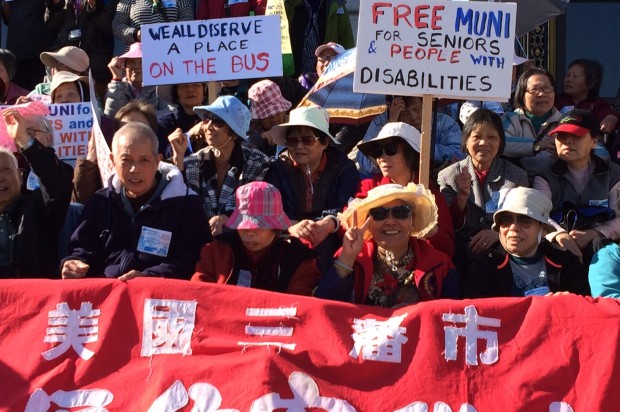 The San Francisco Municipal Transportation Agency’s board of directors voted unanimously today to waive the Muni fee for riders with disabilities and for low- to moderate-income seniors, many who live with fixed incomes and struggle to afford public transportation as the cost of living in the city increases.

Dozens of San Franciscans, including disabled individuals in wheelchairs and elderly citizens, came en masse to San Francisco City Hall this afternoon to urge the SFMTA board of directors to approve a pilot program that will provide free Muni for seniors and persons with disabilities beginning March 1.

The pilot program has an end date of June 30, 2016, but the SFMTA plans to consider extending it prior to the end date.

SFMTA board chairman Tom Nolan was among the advocates for the program and addressed a large crowd of San Franciscans on the steps of City Hall prior to the board’s scheduled vote.

Nolan said he frequently rides Muni and sees a need for the program every day.

He said the program is expected to cost $4 million in lost revenue per year, but that the city is doing well and can afford it, while many San Franciscans cannot.

Currently, seniors and people with disabilities pay $23 per month or 75 cents per ride to travel on the city’s buses and light-rail vehicles.

Nolan said the pilot program that brought free Muni to San Francisco youth has been a huge success and showed that many other San Franciscans could benefit greatly from free public transportation.

He said he hopes private companies will step up and help fund the program in the years to come, just as Google helped fund the Muni program for the city’s youth.

Ursula McGuire, a board member of the nonprofit Senior and Disability Action, who is both elderly and wheelchair-bound, spoke at the SFMTA board meeting today following the rally, stating that the program would help her and others with disabilities get around with greater ease.

“It’s crucial that we aren’t left behind,” McGuire said to the board and the large crowd gathered at the board meeting.

McGuire said today’s decision is a critical step to ensure everyone, including those with disabilities and fixed incomes, can participate in the community and access all that the city has to offer.

McGuire has been fighting for increased civil rights protections for people with disabilities since she started to become paralyzed in 1965. Initially, she was unable to speak and move, but with physical therapy she has since regained her ability to speak and gained some movement in her upper body.

Many other people with disabilities, including Cristina Rubke, a member of the SFMTA board, expressed their approval of the program today.

Rheema Calloway, an organizer with Causa Justa, said the program will help address the city’s growing economic divide and help many of the city’s most financially needy individuals, who already struggle to pay for rising costs of medical co-payments, rent and groceries.

San Francisco supervisors Eric Mar, David Campos, Jane Kim and Norman Yee also attended the board meeting and thanked the board members for supporting the program.

Mar said he believes the decision is a reflection of the city’s values, as it expands the safety net for people struggling to live in the city and will allow for individuals to live less isolated lives.

He said he is hopeful that the SFMTA will choose to fund the program on a permanent basis creating “transit justice for everyone.”

SFMTA spokesman Paul Rose said roughly 24,000 San Francisco residents are expected to participate in the new program, which requires a Clipper Card, based on existing participation of disabled and senior fares.

Rose said starting Wednesday the application for the program would be available online at www.sfmta.com/freemuni or by calling 311.