Appealing TV: Justified’s Final Season, The Nightly Show With Larry Wilmore, The Sons Of Anarchy, I Mean Liberty, And The State of The Union

2015 State of the Union American Horror Story: Freak Show Arrow Backstrom Black Sails Jane the Virgin Justified King of the Nerds Sons of Liberty The 100 The Flash The Nightly Show with Larry Wilmore UFC on FOX 14 by Paolo Sambrano | January 19, 2015 12:00 am | in Culture | 0 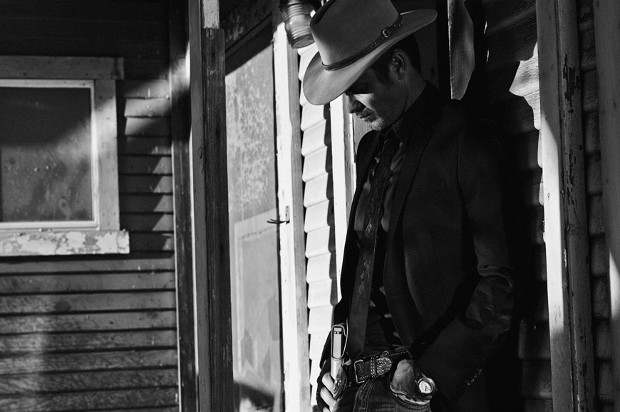 The Nightly Show with Larry Wilmore (11:30pm, Comedy Central, series premiere)
Replacing The Colbert Report is comedian Larry Wilmore’s late night talk show. Formerly dubbed The Minority Report, thanks to FOX mining movies for TV shows we get the more generic (and a little inferior, frankly) The Nightly Show. Larry Wilmore, as the Senior Black Correspondent on The Daily Show and the original showrunner on ABC’s Black-Ish has been on-point for years now, and I am super excited for him. Consider this an a little bit Daily Show, a little bit Meet the Press amuse bouche before President Obama’s State of the Union on Tuesday.

Tuesday, January 20
2015 State of the Union (6pm, ABC, NBC, CBS, FOX, etc etc etc)
I am guessing Obama must have some opinions about the Oscar nominations and snubs this year. Pretty much every major network and news channel will be broadcasting it, so at this point it just depends on which political pre-game/post-show analysis you want. Kidding, it’s all the goddamn same.

The Flash (8pm, CW, winter season premiere)
The CW ascending from joke to Golden Globe winning network is kind of a super hero origin story, if you think about it, and The Flash knows what it is, and it does it very well. We can also thank The Flash for reuniting Prison Break stars Wentworth Miller and Dominic Purcell, which is the first step to a Prison Break continuation, which according to FOX’s TCA session on Saturday the network “would bring back in a heartbeat.” (This also means my Prison Break vision board is starting to manifest.)

Justified (10pm, FX, season premiere)
This modern take on a western tale with Timothy Olyphant as Deputy U.S. Marshal Raylan Givens has been such a TV treat for the last five years. While the last season was a bit of a misstep (and featured Michael Rapaport with an iffy southern accent), the otherwise sterling series goes off grandly into the sunset, focusing on the core trio of Boyd, Raylan, and Ava. Expect fireworks and forty word soliloquies when four words would do. Now all we need is a spin-off about America’s first ever elephant Deputy U.S. Marshall. It’s called Tuskified, starring Timothy Elephant. I even drew a sketch of the poster: 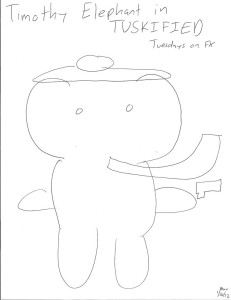 Wednesday, January 21
Arrow (8pm, CW, winter season premiere)
I started watching Arrow because of The Flash, and while I can appreciate Arrow as a counterpoint (get it, because arrows? I’ll see myself out) to The Flash, I, I just can’t with Arrow. It’s a serviceable enough super-hero, comic book TV show, sure. But Oliver Queen is the worst white savior horseshit, and is it enough that the show acknowledge and be self-aware of the tropes if it does nothing about it? ANYWAY. The shocking events of the fall finale will begin to shake down. But what will happen to the salmon ladder?

The 100 (9pm, CW, winter season premiere)
Maybe it’s the nostalgia talking, but last week was the ten year anniversary of the Battlestar Galactica pilot, “33.” And Lord knows I’ve gushed about The 100 enough on the Appeal, but fuck it, I think The 100 may just be the true heir to BSG’s legacy.

Thursday, January 22
Backstrom (9pm, Fox, series premiere)
From the Executive Producer of Bones, based on the series of Swedish mystery novels, Rainn Wilson returns to television as overweight asshole self-destructive genius murder police in Portland. We’re all looking for lesbians in a shed, Backstrom commercial spots, we get it. Dennis Haysbert also co-stars.

Friday, January 23
King of the Nerds (9pm, TBS season premiere)
The third season of the surprisingly not-bad nerdy reality competition features a couple of contestants from the Bay Area. Kaitlin, a NASA engineer out of Redwood City and Jacob, a stand-up comic/quizmaster from Oakland will be competing for the right to sit upon the Throne of Game and to be crowned this season’s King of the Nerds. Returning to hosting duties are Revenge of the Nerds alum Robert Carradine and Curtis Armstrong.

Saturday, January 24
UFC on FOX 14 (5pm, FOX)
Former title contender Alexander Gustafsson fights against Anthony Johnson in the main event for first UFC first card on network TV for 2015. Taking place in the Tele2 Arena in Stockholm, Sweden, this is being touted as a number one contender fight for Jon Jones’ light-heavyweight championship. It was most recently defended against Daniel Cormier at UFC 182 earlier this month (although you probably cared more about the whole Jon Jones testing positive for cocaine news bomb that blew up a mere couple of days after his fight). And let’s be frank, promised title shots in the UFC are about as secure as Bitcoin. This is your periodic reminder that MMA can be a stupid, stupid garbage fire of expired Halloween candy of a sport.

Black Sails (9pm, Starz, season premiere)
Pirates! They were a thing! The second season of the Michael Bay executive produced Black Sails aims to remind you of that, flying that pirate flag high, chock full of the pirate politics, pirate sex, and pirate violence you can handle.

Sunday, January 25
Sons of Liberty (9pm, History Channel, miniseries premiere)
After History’s success with Vikings, and their past experience in big historical mini-series type events, History Channel is going back to the non-World War II/Hitler was an occultist/pawned goods well with Sons of Liberty. Not to be confused with the Sons of Anarchy Motorcycle Club, although I’m guessing the founding of this country was as convoluted as the later seasons of Sons of Anarchy. Then again, the three-night miniseries event from the History Channel seems to be taking a SoA-esqe approach to the founding of this country, judging by the trailer (or boy band approach – Benjamin Franklin is the dreamy one!). At this point, History Channel can define “history” as taking a photo on Monday to use on the same week’s Throwback Thursday.