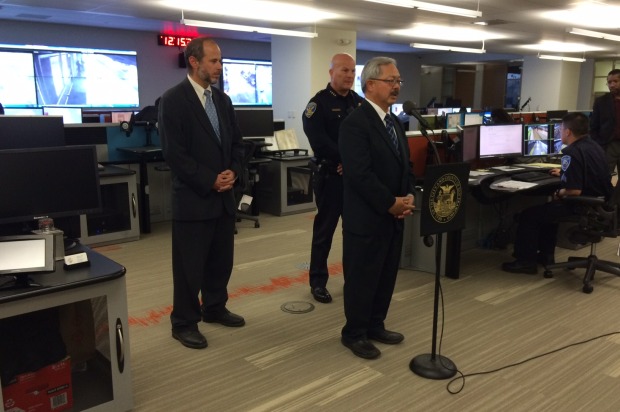 Drivers in San Francisco who block intersections or double park their vehicles can expect to get ticketed as the city begins cracking down in an effort to ease the city’s traffic congestion and make streets safer for pedestrians, according to top city officials.

San Francisco Mayor Ed Lee, police Chief Greg Suhr and San Francisco Municipal Transportation Agency’s director of transportation Ed Reiskin, came together today at the SFMTA’s new transportation management center on Market and 10th streets to discuss how the city is shifting its enforcement strategy, to not only ease traffic congestion but to make the city safer for bicyclists and pedestrians through increased traffic enforcement.

Mayor Lee said that starting today and increasingly in the coming months, the SFPD and the SFMTA will be working together to heavily monitor intersections with chronic congestion.

Lee said the city will be issuing tickets to violators as well as working to identify other factors contributing to traffic jams, such as traffic signal and walk signal timing.

“Unless you really like to pay the city, don’t be in that box,” the mayor said.

Chief Suhr said “Blocking the box creates anxiousness, anxiousness gets people to do things that they wouldn’t do, and they do them hastily.”

Suhr said that when drivers block intersections it leads to cars cutting across other lanes of traffic and pedestrians not being able to get through crosswalks safely.

He said more than 200 tickets have been issued to drivers blocking intersections since last week.

Suhr said the enforcement is necessary to reduce the number of pedestrian fatalities. Drivers who enter the box without enough space to get to the other side will have to pay an expensive price for breaking the law, he noted.

Mayor Lee also said police will also be cracking down on those drivers who choose to double park their vehicles, including commercial vehicles.

He said that with an increase in construction sites across the city, more commercial vehicles have been blocking intersections, leading to endless complaints from citizens as well as businesses that are adversely affected.

Both Lee and Reiskin said the city will be taking closer a look at the permitting process and bolster on-the-ground enforcement of those permits to ensure that pedestrians are accommodated and traffic can still flow through.

Lee said the city’s long-term transportation goals are through “the lens of Mission Zero,” which strives to eliminate pedestrian fatalities.

He said the city wants to see better traffic flow and safer streets, and said the passage of Proposition A in the November election shows that San Francisco residents want the city to be a safer place to live and work.

Lee said that more and more people are walking and biking instead of driving, and that the city needs to respond to that change.

Among the most dangerous intersections, which the SFMTA and police will be closely monitoring, is Van Ness Avenue and Grove Street, just outside City Hall.