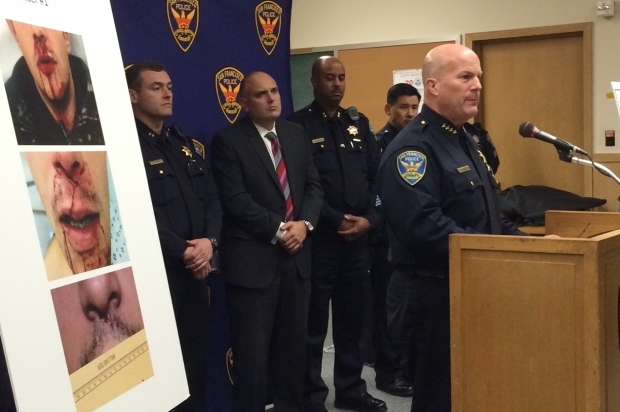 Seventy-nine people were arrested and five police officers were injured in San Francisco on Friday night during a demonstration held in reaction to the grand jury decision not to indict a police officer in Ferguson, Missouri for the fatal shooting of an unarmed teenager, San Francisco police Chief Greg Suhr said this afternoon.

“We understand that there are many that are profoundly disappointed with the decision of the grand jury,” Suhr said, but he emphasized the importance of people expressing their frustrations and pain in peaceful, non-violent ways.

Suhr said a group of demonstrators began assembling at about 5 p.m. on Friday at Justin Herman Plaza near the Ferry Building, while another group gathered at about the same time in the center of Union Square prior to the Macy’s tree-lighting ceremony.

The combination of Black Friday shopping and the annual tree lighting ceremony brought throngs of visitors and locals alike to Union Square that evening.

When the demonstrators who had arrived from Justin Herman Plaza reached the southeast corner of Union Square, they attempted to break through a barricade and then through a skirmish line of police officers at the intersection of Stockton and Geary streets, Suhr said.

While officers in riot gear were able to stop the protesters from reaching the tree-lighting ceremony, some of the protesters began throwing rocks and bottles at the officers, according to Suhr.

He said the demonstration “started to go sideways” when one demonstrator used a barricade to break a window at Macy’s on Stockton Street.

Thousands of people, including families with young children and elderly persons, filled the streets surrounding the square and when demonstrators began smashing windows, many of the bystanders began running away from them, screaming.

The windows at Crate & Barrel were smashed, as well as windows at Grace Jewelry, located at 121 O’Farrell St.

An employee at Grace Jewelry said he saw a young man use a sledgehammer to smash the shop windows.

Suhr said windows at other Union Square businesses were also smashed at about this time of the protests.

The demonstrators then headed to Market Street, where the first of five officers was injured. Suhr said the officer was struck in the head and back by a construction sign and suffered soreness to the neck.

This was captured in a YouTube video and showed another officer who attempted to go after the person who threw the sign.

That officer then tripped and suffered abrasions to the hands and legs. The officer was rendered immobile and suffered a finger injury, Suhr said.

The chief said the protesters were going beyond their First Amendment rights to assemble and march, and became “violent demonstrators.”

Officers ordered the crowd to disperse and arrested those who assaulted the officers.

The protesters then headed west on Market Street and into the Mission District.

Some of the protesters headed to 24th and Mission streets where there were reports of windows being broken.

Two more officers were injured as they were responding to the intersection.

One of those officers was seriously injured when he was struck in the face, just under his nose, by a tequila bottle that was thrown through the closed window of the police car he was in.

It required four stitches to close the wound and Suhr said it remains unknown whether that officer will be permanently disfigured or if he requires further surgery.

That officer’s partner was struck by a large rock, also thrown through a closed police car window.

Both officers are recovering, Suhr said.

Officers arrested multiple people there following the attacks, as well as a person attempting to steal electronics from a nearby RadioShack.

Suhr said police were able to arrest the group, bringing the total number of arrests for the night to 79 people.

Suhr said a fifth officer suffered a laceration to his hand during an arrest and sought treatment.

Many other officers also reported being struck by objects during the protests, he said.

Police gathered evidence on Liberty Street, including bricks, rocks, an unbroken tequila bottle, a chain with a padlock, black face coverings, and a knife.

The chief released the names of the 79 protesters today, with the exception of six juveniles.

Of the 79 arrested, 23 were San Francisco residents and 21 were Oakland residents.

Four of those arrested were booked on felony charges, Suhr said.

Suhr said the conduct at Friday’s protest was criminal and conducted by a “fringe element” that he said appears to embed themselves in peaceful protests before acting out.

“Sometimes the words that you hear are loud and hurtful, but we don’t want to be what generates the act,” Suhr said, referring to protesters who accused the department of being comprised of racist officers.

No vandalism arrests have been made at this point, despite windows being broken at a Bank of America, a McDonald’s and a RadioShack, in addition to shops damaged at Union Square, Suhr said.

He said police are canvassing the area and asking for any additional videotape or surveillance footage that could help the department identify and prosecute suspects.

Suhr said that inevitably more protests will occur in the future and that body-mounted cameras could help prosecute those who choose to attack officers.