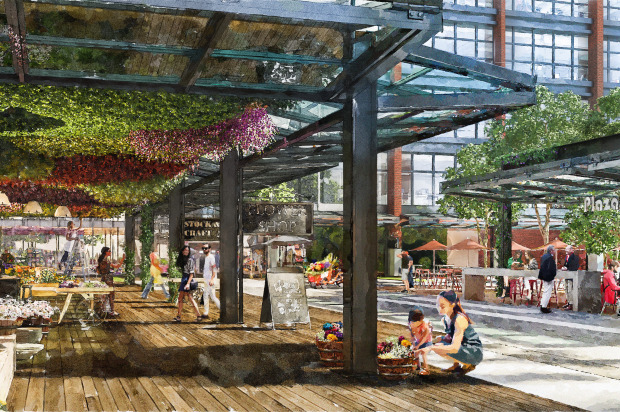 Tensions ran high today over the fate of the San Francisco Flower Mart after a major developer announced that it would redesign the flower market, thought of by many as a historical landmark that fosters one of the remaining working class industries in the city.

Kilroy Realty Corporation officials today said that all tenants at the San Francisco Flower Mart have been offered a five-year lease and that a 25-year lease at the new facility will then be offered to tenants in good standing.

According to a sign posted inside the Flower Mart today, the California Flower Market will manage the day-to-day operations of the San Francisco Flower Mart prior to and during construction of “a new state of the art facility on the site of the existing Flower Mart.”

The California Flower Market and Kilroy also promised to hold regular meetings with all interested tenants over the next couple months to work out details concerning the new facility. Issues such as loading, refrigeration, parking and design, will be discussed.

Kilroy and the California Flower Market also expressed intent to keep tenants on site or on an adjacent site during construction, in order to minimize relocation impacts. Kilroy also offered to pay for all costs associated with the relocation of tenants, whether the temporary location is on site or off.

Mike Grisso, the senior vice president of development and land planning at Kilroy, said that Kilroy has yet to hire an architect and there is still time for tenants to weigh in on the design of the new facility.

Renderings released today show a colorful and bustling subterranean flower market with aboveground open spaces and at least three large multi-level buildings that would be in violation of the 40-foot height limit currently in place in the area.

Grisso said that he “anticipates a change in zoning” in the future under the San Francisco Planning Department’s not-yet-finalized Central SoMa Plan.

Jon Gomez, of Americana Flower Brokers, a tenant of the Flower Mart said he trusts that the developer will be true to their word and provide the market with much needed improvements.

Standing in an alley behind the market this afternoon, Gomez said he worries about the safety of workers, many of whom are female and work early morning shifts.

He said he hopes the market can be transformed into a place where he can “showcase his flowers with pride.”

Christina Stemble, the founder of Farmgirl Flowers, known for delivering bouquets by bicycle messenger, said she has been a member of the Flower Mart since 2012 and agreed that the building needs improvements.

“We have the opportunity to make the Flower Mart better,” Stumble said.

Not everyone greeted today’s announcement positively, however.

Melanie Ann Tom, a florist who runs the Hawthorne Flower Studio in Oakland and comes to the San Francisco Flower Mart to buy flowers at wholesale prices, filed a complaint with the San Francisco Ethics Commission last week against Grisso. Grisso has represented the development company during their purchase of the property on which the Flower Mart stands at Sixth and Bryant streets.

In the complaint filed on Dec. 8, Tom alleges that, “Former Redevelopment Agency and Office of Community Investment and Infrastructure employee Mike Grisso negotiated a job with Kilroy Realty while still working for the government, has lobbied his former colleagues on behalf of his new employer and has not registered as a lobbyist.”

In addition to the ethical questions Tom raised, she also said that Kilroy has been reluctant to make concrete promises to the vendors at the Flower Mart and that the renderings for a new space at the same location are in violation of the city’s current zoning rules.

Tom said the Flower Mart is “one of the last places in the city where you have working class jobs” and she said she feels the tenants should have more input on its future and should be able to reject or accept the idea of being pushed underground.

Amid concerns that the San Francisco Flower Mart could be dismantled or relocated in favor of high-rise development, a citizens’ initiative was announced in October that, if passed, would preserve the current zoning of the market.

The citizens’ initiative, titled the San Francisco Flower Mart Protection Act, will need 9,703 signatures to get a spot on the November 2015 ballot, according to Aaron Peskin, a former member of the city’s Board of Supervisors.

Kathleen Dooley, a florist and a commissioner in the city’s Office of Small Business, said in October that she filed the citizens’ initiative under her name because she felt she had to fight for the roughly 80,000 jobs that the Flower Mart supports.

“I did it out of frustration,” Dooley said.

The jobs supported by the Flower Mart include a variety of professions ranging from growers in Northern California and around the world to truck drivers, vendors and florists in the Bay Area.

Many of the vendors, however, said today that as long as all the vendors can remain on the property, they are interested in change and would love to see the Flower Mart redesigned like the Ferry Building with pedestrian access, coffee shops and security.