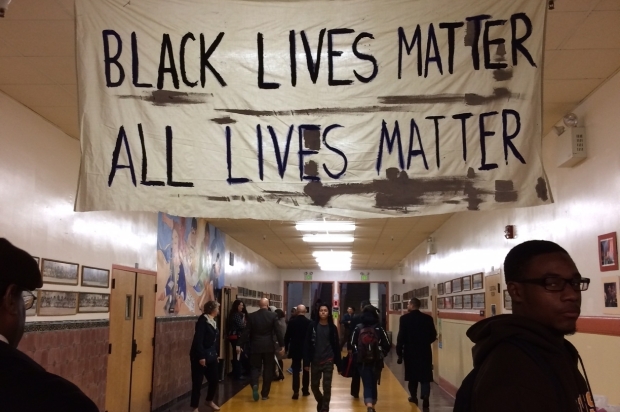 Michael Brown Sr., whose son’s death in Ferguson, Missouri by a police officer sparked a wave of protests in the Bay Area and around the country, met with hundreds of San Francisco high school students from across the city this evening to discuss issues regarding race and society.

Cepheus Johnson, known to the community as Uncle Bobby, is the uncle of Oscar Grant III, who was shot and killed by police in Oakland, and also spoke with students today who gathered after classes let out for the day at Mission High School.

The student forum was held by Mission High School’s Black Student Union in conjunction with the NAACP. The forum was held in a crowded auditorium with large banners that read, “I can’t breathe” and “black lives matter all lives matter.”

A question-and-answer session was held with Brown Sr., Johnson and religious leaders in the community. Afterwards, the president of Mission High School’s Black Student Union, 16-year-old Hatim Mansori, listed actions that the students want to see implemented to protect the lives of people in San Francisco.

Mansori said that in the event of a police shooting a special prosecutor must be involved and that within San Francisco Police Department de-escalation policies, sensitivity training and local hiring should be prioritized.

He said the “tragic unjust killings and failure to arrest people” has finally brought everyone to their feet.

“It just goes to show how much people care when power is corrupted,” Mansori said.

Many students asked the panel of speakers what they could do to help and ensure that both the lives and deaths of Michael Brown and Oscar Grant are remembered and honored. Other students expressed their frustration about inequality and wanted to know what was needed to see change in their community.

The Rev. Amos Brown spoke with students at the forum and urged those who are upset about racial inequality and police brutality to register to vote when they turn 18, reminding students that juries are comprised of registered voters.

Michael Brown Sr. encouraged students to stay in school and remember that by making art and music about their personal struggles and the struggles of others they can express themselves and make change.

Eric Guthertz, principal of Mission High School, also spoke to students, urging them to “think deeply” and the take action in a peaceful, respectful and collaborative way.

One student, a junior in high school, who spoke at the forum, said his brother, 16-year-old Richmond resident Leonard Bradley, was fatally shot in San Pablo in 2009 by a police officer. He said his brother was unarmed at the time and the coroner’s report indicated he had been shot five times by the officer.

He said it hurt to lose his brother but that it hurts more to know “that they continue to do it, as if our lives don’t matter, but our lives do matter.”

Before the students and panel dispersed, a group of students lay on the floor of the stage representing those who have been killed by police and urging students to keep up the fight for equality and justice.

During the student performance, performers chanted, “I can’t breathe” representing those who had been killed and in response, those in the auditorium chanted, “We’ll breathe for you.”