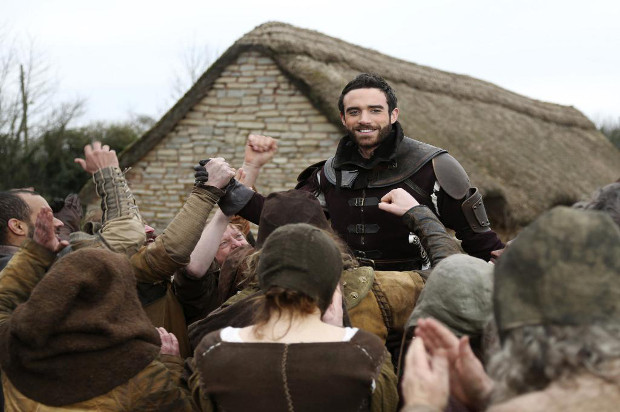 Happy new year! That means: Hangovers! Pretending for a precious few hours that the upcoming year is going to be any different than the past one! TV marathons! And for the shut-in in you, why would you want to leave on New Year’s Eve anyway? It’s for the birds, the amateurs, the, dare I say, basic. You have plenty of television to keep you company as your Xanax and sparkling wine gently lull you into the cold daylight of 2015. Maybe you can get it together enough to go to Pegasus Books’ annual calendar sale. Who knows, that could be a start.

Anyway, I’m no big city TV writer, but I’d love to share with you some of my favorite TV of 2014 (from someone who hasn’t started Transparent yet, because: embarrassment of riches)

Monday, December 29
It Takes a Choir (12pm, USA, series premiere)
The British import/adaptation featuring Gareth Malone going around recruiting people to help build a choir was supposed to debut last year but was pushed back, and now they are burning the entire season off on the last Monday of 2014.

Tuesday, December 30
The Walking Dead Marathon (9am, AMC)
I have a group of friends who have recently started watching The Walking Dead, and there is a part of me that just wants them to skip everything and start with this current season. Or maybe they need to go through Carl being in the house, and Andrea ACTING! ™ in order to appreciate the show in its current state? I also have been hearing that binging past seasons isn’t that bad, which feels like feint praise at best. Well, if anything, it’d be worth it to watch past seasons’ opening titles, as they are one of the best opening sequences in TV today.

Wednesday, December 31
Khloe and Kourtney Take the Hamptons Marathon (7am, E!)
Watch the Kardashian sisters Khole and Kourtney execute their Kampaign of destruction, bad taste and scripted events in the Hamptons. Think of it like watching an old History Channel special about how the Allied forces eventually pushed from the beaches of Normandy to Berlin.

How I Met Your Mother Marathon (9am, Lifetime)
Ted Mosby is the ultimate thirsty fuck boy throughout the show, and might even be considered its antagonist (largely because everyone else around him was so much more interesting). Might be worth rewatching to see Ted’s Breaking Bad-esqe transformation from well-meaning sentimental type to ultimate thirst.

The Twilight Zone Marathon (8am, SyFy)
Hey, kids, with your texting and putting entire consciousness in the cloud, if you liked Black Mirror, you should take it upon yourself to watch the Rod Serling’s seminal science fiction anthology series.

Pitbull’s New Year’s Revolution ’14 (8pm, FOX)
For some reason FOX decided to break up Pitbull’s New Year’s Revolution into parts one and two, as if it was a young adult movie adaptation sequel cash-grab. There will be none of that here, if you want to watch four hours of Pitbull and his cronies Fall Out Boy and Fifth Harmony revolt against 2014 and overthrow it with their leader 2015, that’s on you. (They are in Miami, just 90 miles outside of Cuba, after all). Trigger warning: Pitbull will speak Spanish phrases in between English sentences.

New Year’s Eve With Carson Daly (10:00 p.m. NBC)
Don’t forget about Carson Daly! To the three of you who actually watch Last Call with Carson Daly, I am slightly hoping that his New Year’s Eve special is essentially just like his show, where it’s a camera that is plopped down and everybody is only marginally aware of it, and it’s just super chill (in a cool dad way). He’s bringing his friends in The Voice to help spice things up, along with a duet from Tony Bennett and Lady Gaga.

New Year’s Live (11:30pm, KRON-4)
If you must keep it local, KRON’s annual New Year’s Eve show features the fireworks at the Embarcadero, and maybe a month’s worth of People Behaving Badly from Stanley Roberts. Who knows, maybe we’ll have another rich person drop the F bomb on live TV like last year?

Thursday, January 1
Portlandia Marathon (6am, IFC)
Once Portland annexes itself from the United States, calls itself Portlandia and installs Carrie Brownstein and Fred Armisen as leaders for life, Portlandia becomes a cautionary tale. Why didn’t we see this coming?

Futurama Marathon (9am, Comedy Central)
Relive this great show, as we hurtle one minute into the future.

Friday, January 2
Whale Wars (8pm, Animal Planet, season premiere)
Those darn Sea Shepherds are back at it again with their water hoses and stink bombs against Japanese fishing vessels, and if they weren’t trying to do it for the whales, Whale Wars would just be the longest, most protracted stunt on The Eric Andre Show ever.

See you next Monday! Happy new year! See you in the future!