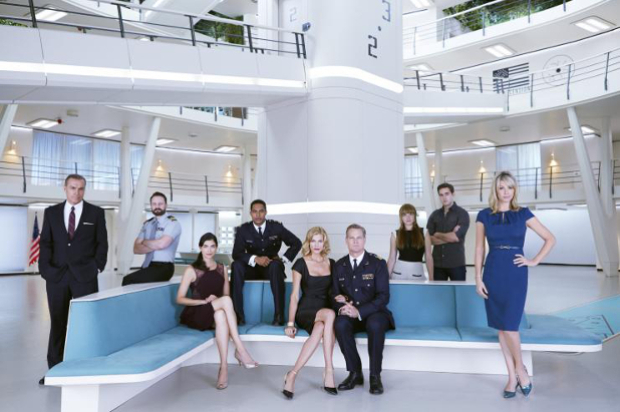 So what if your favorite show didn’t get nominated for the Golden Globes? The Golden Globes is like being a kid at a family function summoned by your parents to play Fur Elise in front of your drunk relatives. The praise feels good, but it’s weird because everybody is drunk, but you have to thank them anyway or else you’d be rude.

Monday, December 15
Ascension (9pm, SyFy, miniseries premiere)
Since SyFy realized that shows about molecular gastronomy or Joe Rogan questioning things weren’t, the channel has re-upped its commitment to programming things that sound like its name. Ascension is a three-night limited series starring Battlestar Galactica’s Tricia Helfer and Cougartown’s Brian Van Holt as inhabitants of a space station launched during the JFK administration, leading to a 60’s period piece in space. If the show does well perhaps it will be picked up a la Battlestar, but, if anything, I’m looking forward to Van Holt in the role, because in space nobody can hear you scream PENNYCAN!

Hart of Dixie (8pm, CW, season premiere)
The fourth season of the fish out of water (big shot NYC doctor in small Alabama town) will only have ten episodes. broadcast on Friday nights starting January 9.

Jane the Virgin (9pm, CW, fall season finale)
When writing about Jane the Virgin, the word “delightful” is inevitable. The adaptation of the Venezuelan telenovela certainly transcended its batshit crazy premise in order to become a show that’s hilarious and full of heart.

Tuesday, December 16
Elf: Buddy’s Musical Christmas (8pm, NBC)
It looks like somebody spent their Christmas wish hoping for a retelling of Will Ferrell’s Elf (combined with parts from the Broadway version) in a stop-motion animated special featuring the voices of Jim Parsons, Mark Hamill, Fred Armisen and Gilbert Gottfried.

The Real World (10pm, MTV, season premiere)
The venerable reality show has undergone procedures to try and maintain its relevancy. After last season’s San Francisco based Explosions (read: ex-plosions) featuring, get it, exes, the thirtieth season’s theme is “Skeletons.” Based in Chicago, the castmates will have one person from their past they’d rather keep quiet.

Wednesday, December 17
Michael Buble’s Christmas in New York (8pm, NBC)
The crooner has his own special in New York. Also joining him are Ariana Grande, Barbra Streisand and Miss Piggy.

The Sing-Off (9pm, NBC)
Thank god Pitch Perfect 2 is coming out or else this a capella competition would have felt like a quaint relic from the era when Glee wasn’t awful. This two-hour special features judges Jewel, Shawn Stockman, and Fall Out Boy’s Patrick Stump.

The 100 (9pm, CW, fall season finale)
At its most reductive, The 100 is Battlestar Galactica stripped for parts and LOST in the future. But beyond the casual (and lazy) comparison, The 100 is a confident, turbo charged punch in the stomach of the grayest of moral grays, tough choices (with consequences), and from where I’m standing, a post nuclear apocalypse tale about gentrification and colonialism. The 100 also boasts an amazing ensemble of women in prominent roles who aren’t just “strong” or want it all. The 100 is definitely going in my best-of 2014 list, and it goes without saying, get off your high horse about this being on the CW. Despite everything that has happened in 2014, at least we can take The CW seriously as a network now.

Thursday, December 18
White Collar (9pm, USA, series finale)
Well, I hope you got your fill of jaunty hats, cons, and Saved by the Bell’s Tiffani Thiessen on TV (although I suppose you could dig up 2002’s Fastlane if you are jonseing for a non Saved by the Bell show she was in).

Saturday, December 20
Christmas Icetastrophe (9pm, SyFy)
It isn’t Christmas until you try to stop a meteorite from crystallizing your town. God ice us all! Every one of us!

Sunday, December 21
Homeland (9pm, Showtime, season finale)
Hey Homeland, if you can’t reach the dramatic heights of season one, then at least be fun. And that’s what the last few episodes were. Maybe that’s the most we can ask?

The Affair (10pm, Showtime, season finale)
The Rashomon of of relationships ends its first season of adultery and Joshua Jackson as a rancher, but will be coming back for a second.