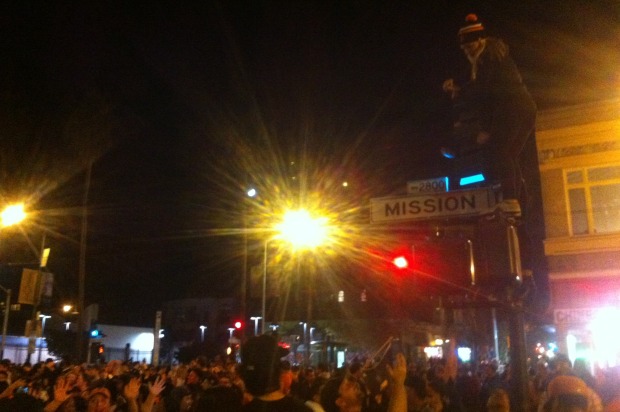 The damaged Muni buses and trolleys, which sustained broken windows and graffiti following the Giants’ 3-2 Game 7 win over the Kansas City Royals on Oct. 29, were mostly located on Mission Street and Market Street in the Mission District and South of Market neighborhood, according to SFMTA spokesman Paul Rose.

Rose said the transit agency also had to pay for additional labor costs with repair work being conducted on damaged buses throughout the night following the win, to prepare for the morning commute.

He said the SFMTA was more prepared for vandalism after the Giants 2012 World Series win that led vandals to cause $700,000 of damage to a bus that had just undergone $300,000 in upgrades, costing taxpayers $1 million.

To avoid giving vandals as many opportunities to prey on buses, the SFMTA rerouted buses around large crowds and turned off power to the overhead lines.

The crowds also vandalized nine police cars during the night. Four patrol vehicles were tagged with graffiti and five sustained broken windows and windshields, according to police.

The rowdy crowds also exhibited violence in the streets by throwing bottles at police officers and starting bonfires, resulting in about
40 arrests the night of the World Series win.

San Francisco police Chief Greg Suhr was out on the streets himself following the big win and said he encountered a lot of “jerks.”

Suhr said three police officers were struck with bottles by unruly revelers and were transported to the hospital with injuries.

All three officers were released from the hospitals and are OK, Suhr said.

Other officers were also struck with bottles, but were not treated at the hospital, Suhr said.

The night of the celebrations there were two injury shootings and a stabbing, all reportedly took place in the Mission District.

The police chief said the majority of celebrators behaved “spectacularly” but about 100 were “disgraceful.”

“It makes us look bad and it’s a shame,” Suhr said of the violence.