14 Arrested In “Blackout Black Friday” Protest That Shut Down BART 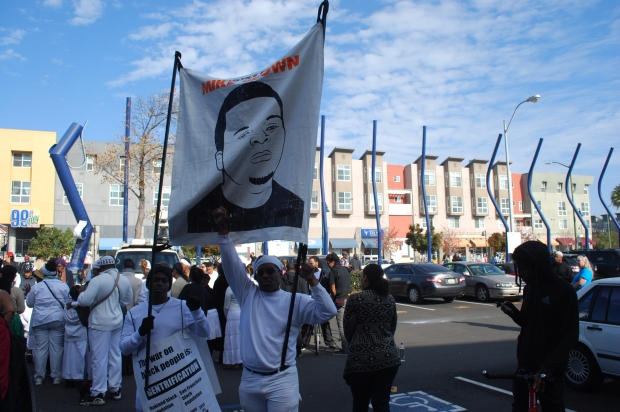 The West Oakland BART station has reopened and trains are running through the Transbay Tube again this afternoon after a protest at the station ended in more than a dozen arrests and prompted system-wide BART delays, a transit agency spokeswoman said.

BART trains are running through the Transbay Tube again this afternoon and 14 protesters have been arrested after chaining themselves to each other and to two BART trains at the West Oakland BART station, according to BART spokeswoman Alicia Trost.

The demonstrators, whose names have not been released, were arrested for a variety of alleged offenses including obstruction of a train, the spokeswoman said.

The station reopened a short time before 1 p.m., but residual system-wide delays of about 10 to 15 minutes persisted as of 1:50 p.m.

During the service disruption, BART trains on either side of the West Oakland station turned around at various locations throughout the system and service continued on both sides of the Bay, Trost said. Meanwhile, BART officials pointed BART riders to other transportation options for transbay travel including AC Transit, which shuttles passengers between the Transbay Terminal and West Oakland on its NL and O lines.

Numerous posts on Twitter linked the protests to “Blackout Black Friday,” a nationwide campaign to protest the August fatal shooting of 18-year-old Michael Brown by Ferguson, Missouri police Officer Darren Wilson and a grand jury’s decision earlier this week not to indict Wilson.

A group of protesters on the West Oakland BART station platform around noon could be heard chanting, “Black lives matter!” and about 100 more rallied outside the station.

Meanwhile, the protest left many BART riders on both sides of the bay stranded today.

Oakland resident Sonja Reed said she waited at the West Oakland BART station for more than an hour today while trying to get to San Francisco to go shopping.

But Reed said she didn’t mind the delay, because shares the protesters’ frustrations.

“I just wish we could be heard. Instead of tearing our city up, I wish we could learn do something so we can be heard and make a change,” said Reed, who is black.

“Police are killing black people,” she said. “What do we do so we don’t have to worry about this?”