Supervisor Katy Tang Elected as Interim Board of Supes President 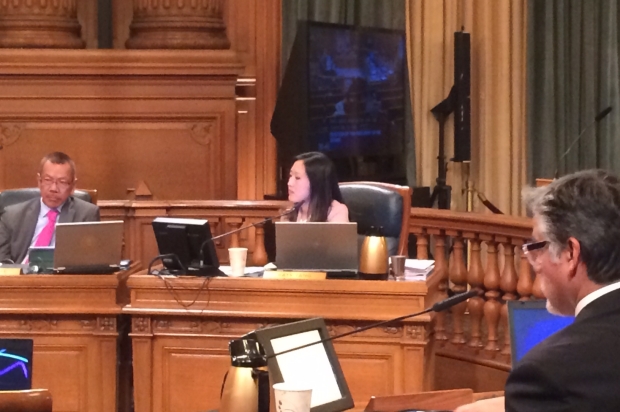 San Francisco Supervisor Katy Tang was elected to the position of interim president of the Board of Supervisors this evening.

Tang will assume the role of president on Dec. 1 when current board president David Chiu will head to Sacramento to be sworn into the District 17 state assembly seat following his win against Supervisor David Campos in the Nov. 4 election.

Chiu will leave behind his post as the San Francisco Board of Supervisors President, requiring both a new supervisor to take his seat and a new permanent board president to be voted on in January.

The letter by Quentin Kopp, Harry Britt, Tom Ammiano, Matt Gonzalez and Aaron Peskin came in response to a special order in the Board of Supervisors meeting agenda today to allow public comment on possible nominations followed by nominations and an election for the board’s next president.

“It is simply wrong for a member who will not be part of the next Board of Supervisors to participate in the election of that Board’s President,” according to the letter.

The former board presidents describe the prospect of the outgoing president casting a vote to fill the post he is vacating as “disturbing and connotates a fundamental disservice to the body upon which he has served.”

They suggested that the election should not be held until Chiu leaves his post as supervisor and board president, at which time there will be a vacancy to fill.

Chiu proposed going ahead with the interim board president election despite the fact that Campos is away on a long-planned vacation.

At least half a dozen San Francisco residents spoke out at the Board of Supervisors meeting today expressing their concern, stating they were troubled the board would consider voting without Campos present and urged them to postpone the vote to another day when all supervisors were present.

Some public commenters went so far as to say that voting for a board president today without Campos felt undemocratic.

Supervisor Scott Wiener said he supported voting today, noting that it is not only legal, but would help the board transition without Chiu.

Supervisor London Breed said she is not willing to put the people’s business on hold and wants to have a board president.

Supervisor Avalos said he felt voting for an interim board president without Campos was not “collegial” and decided not to cast his vote.

Avalos said the city will not face a hardship without an interim board president and wants to see the full board vote for the president.

With six board members voting in favor of nominating the next board president, the nomination process began following public comment.

Eight supervisors voted in favor of Tang for interim president and she was ultimately elected to the position.