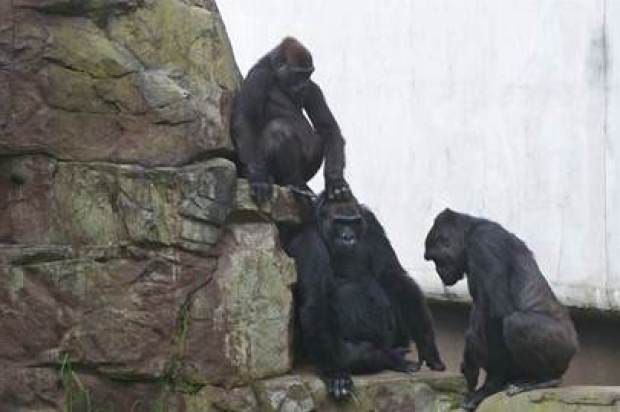 San Francisco Zoo primate staff has been closely monitoring the mourning six-member western lowland gorilla family that lost its youngest member in what was described as a “tragic accident” on Friday, a zoo spokeswoman said.

The gorillas are showing normal signs of grief and loss after the sudden death of Kabibe, a young female gorilla who was killed Friday after she positioned herself beneath a closing hydraulic door during a standard nighttime closing procedure at the zoo, according to spokeswoman Abigail Tuller.

Kabibe was originally removed from the enclosure and brought to a hospital before her body was taken back to the gorilla troop so that they could examine her, as is customary with a primate death.

Bawang, Kabibe’s grandmother, was allowed to touch and examine her body, officials said.

Animal staff reported that each gorilla is dealing with the death in its own way, attuned to their individual personalities.

Since the passing of Kabibe on Friday, the group’s energy and demeanor has been evolving each day, with appetites and exploratory behavior gradually returning to normal, officials said.

Special focus has been placed on Bawang, who was Kabibe’s primary caregiver and showed signs of distress immediately following the accident, such as “calling-out” behavior and loss of appetite.

Bawang has since returned to the zoo’s outdoor gorilla enclosure and has begun to forage for food again, officials said.

The group members closest to Bawang, including grandson Hasani, 5, daughter Nneka, 16, and lifelong companion Zura, 33, have been staying close by her side to console her.

Animal staff is hopeful that the gorillas are processing the loss appropriately and will recover fully over time, officials said.

The zoo has brought in Dr. Terry Maple, a gorilla expert and former chairman of the Association of Zoos and Aquariums, to conduct an investigation into Friday’s accident.