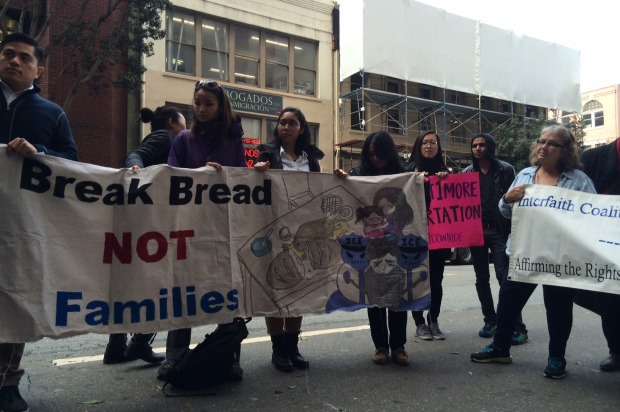 Dozens of protesters gathered outside the U.S. Department of Homeland Security’s Immigration and Customs Enforcement office in San Francisco’s Financial District today to urge the federal government to do more to protect marginalized undocumented immigrants from deportation.

The protest comes following an executive action announced by President Barack Obama on Thursday night that will allow an estimated 5 million undocumented immigrants to come out of the shadows.

While the executive order is expected to allow individuals who have been living in the U.S. since Jan. 1, 2010 and are the parents of a U.S. citizen or legal permanent resident to temporarily stay in the U.S., immigrant rights advocates said it doesn’t go far enough.

Protesters outside the federal offices today said that while they are happy that more immigrants will be able to enjoy the expansion of deferred action, they are disappointed that Obama is perpetuating an ideology of the deserving and the undeserving.

Immigrant rights advocates including members of the East Bay Immigrant Youth Coalition expressed their concern about what the President’s order would mean for the remaining undocumented people who will continue to face deportation, including those currently detained and the especially difficult circumstances faced by lesbian, gay, bisexual, transgender and queer detainees.

Because Obama’s announcement hinges on keeping traditional families together, it overlooked transgender immigrants who tend not to have children, Olga Tomchin, an attorney with the Transgender Law Center in Oakland, said at the protest today.

“ICE has shown us again and again that they don’t know how to detain trans people with even minimum levels of dignity and safety. They have really great polices that exist on paper that they never, ever follow,” Tomchin said.

Such policies outlining proper treatment of transgender persons, include the Department of Homeland Security’s Prison Rape Elimination Act of 2014, ICE’s 2013 segregation directive, as well as ICE’s 2011 national detention standards, which states that staff must “consider the detainee’s gender self-identification and an assessment of the effects of placement on the detainee’s mental health and well-being.”

Yet Tomchin said that LGBTQ detainees, especially transgender women are at a far higher risk of facing sexual violence in detention and often do not continue receiving hormone therapy once detained.

Obama’s speech from the White House on Thursday night did promise, however, to increase resources available to law enforcement personnel at the U.S. borders and ensure that the process allowing high-skilled workers to stay in the U.S. will become easier and faster.

Obama said millions of undocumented immigrants already living in the U.S. who broke immigration laws, but meet the requirements, would not be deported if they register, pass a background check and pay their taxes.

“You can come out of the shadows and get right with the law,” Obama said in his speech.

Obama said the new deal does not protect those who came to the U.S. within the last five years nor anyone who comes into the U.S. without proper documentation in the future.

Obama said his executive action comes in response to the U.S. House of Representatives’ failure to vote on a bipartisan bill that passed through the U.S. Senate more than 500 days ago. That bill would have provided a path for earned citizenship, cracked down on those companies that hire undocumented persons and those persons who continue to try to enter the country unlawfully.

The Asian Law Caucus’ Asian Students Promoting Immigration Rights through Education (ASPIRE) released a statement following Obama’s announcement, saying that while they applauded the expansion of deferred action, they “strongly condemn the President’s action to increase enforcement policies and revamp programs that would further criminalize immigrants.”

Lee, the son of immigrant parents, said the order could impact up to 12,000 undocumented immigrants in San Francisco and that he plans to issue an executive directive to ensure San Francisco’s full compliance with new federal guidelines.

Gascon, an immigrant himself, said he believes the order issued by the President is “essential to protect law-abiding immigrants that are central to this country’s economic, social an cultural vibrancy.”

Gascon said he has seen firsthand, during his 30 years in law enforcement, the impact that “our backwards immigration policies have had on families and victims of crime.”

Undocumented immigrants seeking more information can go to iamerica.org, where they check the eligibility requirements under the President’s executive order.