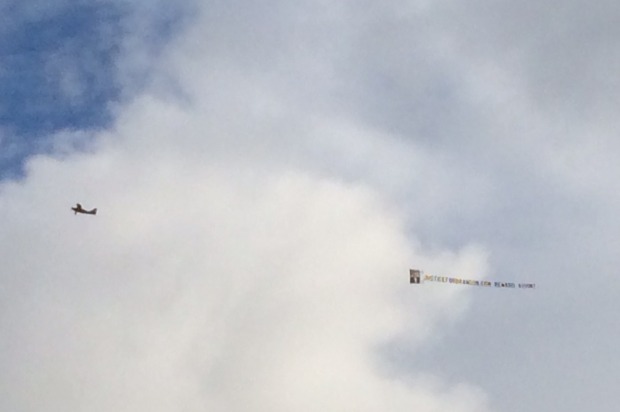 Every year for the past six years, Christine Evans has returned to the site of her son’s murder in San Francisco, hoping new information will lead to his killer’s arrest. Today was no exception.

Brandon Evans, 20, was shot on Nov. 29, 2008 in Golden Gate Park near Conservatory Drive between Fulton and Stanyan streets. Evans said he was with some friends listening to music in the park when he went back to his car to grab his cellphone.

Nine shots were fired, but Evans said it only took one to kill him.

“We believe someone robbed him and shot him in the back,” Evans said. “He was trying to get away from them and they came after him.”

For two hours on the anniversary his death, Evans hires a plane to fly above the park with “justiceforbrandon.com” written on a large banner, directing people to a website Evans established in his memory.

Evans said she still remembers when officers came to her door six years ago to tell her that her son had been shot.

“I said, ‘No, don’t say the words,'” Evans said, her voice choking with tears. “I just walked into my room and left that strange man standing in my house, and then when I came back down, the officer said, ‘Your son was shot in the chest.'”

It took hours before Evans said she was able to speak with a detective and get all of the facts, including the correct information about the circumstances of his death.

Since then however, there have been few updates, Evans said.

“I asked the lieutenant, ‘Is my son a cold case?'” Evans said. “He said it was but that it doesn’t mean he’s forgotten. It just means they’ve exhausted every (lead).”

Evans refuses to accept that in a city as small as San Francisco, no one saw or knew anything.

“There were a lot of people who were in the park,” Evans said. “I just believe that maybe they were young and they don’t want to get involved but maybe if I keep coming every year, I will tug on someone’s heart for whatever reason. Maybe they have kids of their own now so they understand what it’s like. That’s what I’m holding onto.”

Evans described her son as “all about peace and love.” He listened to reggae music and wanted to be a DJ, she said.

He had moved to San Francisco three weeks before his death from San Diego to study music in the city and he liked writing song lyrics and poems, she said.

Evans said she was able to use her son’s life insurance policy from his job at Costco to fund the San Francisco Police Department’s initial reward offer of $10,000.

When then-Mayor Gavin Newsom was visiting San Diego for a speaking engagement, Evans said she brought the flyer she carries around asking for information leading to the arrest and conviction of her son’s murderer and got his attention.

“He told me he had been meaning to call me and told me to give my number to his assistant. He said ‘Anything you want or need, just let him know,'” Evans said. “He kept his word.”

Although she’s exhausted from having to return to San Francisco every year, she said her two other sons keep her going.

“There are times when I want to give up. I feel like I can’t do it again. It’s just destroying me,” Evans said. “But they tell me, ‘You have to. This is what makes us stronger.’ That’s all I have to hear and I’m there.”