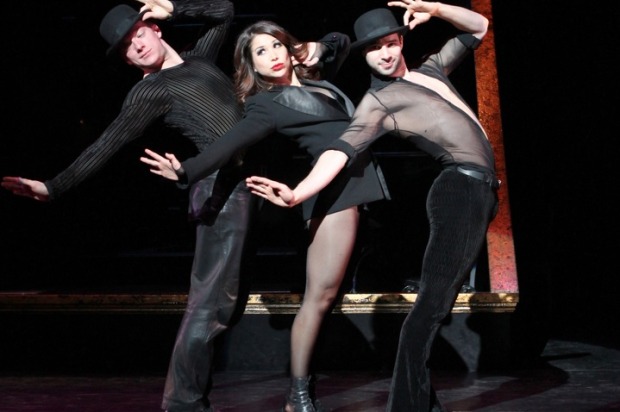 Here’s something I didn’t know prior to seeing the San Francisco premiere of Chicago the Musical at the Orpheum Theatre on Friday: it’s a comedy! And a really funny comedy, at that!

My only previous exposure to Chicago was the 2002 movie that won a surprising number of Oscars. I saw it once, thought the songs were definitely catchy–a few of the cast members certainly sang them better than others–but aside from that, I wasn’t too impressed. And I certainly don’t remember laughing much.

But the stage production is an entirely different matter. It’s a biting and laugh-out-loud funny satire about fame, tabloids, and America’s hunger for sinners. The original musical, with a book by Fred Ebb and Bob Fosse, premiered in 1975, was a huge hit, ran for almost 1000 performances, and was revived in 1997. And it’s pretty much been playing somewhere ever since. This touring production features John O’Hurley as Billy Flynn (and he’s getting top billing since he’s probably the best known actor in the cast, him being J. Peterman, and all), Terra C. MacLeod as Velma Kelly, and Bianca Marraquin as Roxie Hart.

The production is pretty simple; it’s all about the songs, which are almost all instantly recognizable at this point, and the choreography, in this case choreography by Anne Reinking “in the style of Bob Fosse,” which means, yes, lots of jazz hands and hat tipping. There are no real sets to speak of, aside from the bandstand, which is on the stage, allowing the performers to interact with the musicians and the conductor. The costumes are all black, and all skimpy–pretty much what you’d expect to see in a 1970’s musical. Tight, tight pants and sheer t-shirts on the men, leotards and fishnets on the women. (Aside from Billy Flynn, who’s forever in a tux.)

The musical zips along, opening with the memorable “All That Jazz,” and before too long both Roxie and Velma are in prison for murder, and their fellow inmates perform “The Cell Block Tango,” (aka “He Had It Comin!”). It was with this number that I began to notice the show was a little…subdued. I don’t know if it was a problem of opening night stiffness, or just a need to turn the audio up a little bit on both the singers and the band, but the number didn’t have the simmering up to a boil energy it should have.

Roz Ryan’s performance as Mama, with her big number “When You’re Good to Mama,” punched things up a bit, with powerful vocals and comedic delivery. And John O’Hurley is definitely the show’s consistent comedic relief, from his opening number “All I Care About,” surrounded by burlesque girls with feather fans, to the excellent “ventriloquist” routine with Roxie, “We Both Reached for the Gun.”

Bianca Marraquin’s Roxie Hart was the show’s biggest revelation. She plays the character’s combination of naiveté combined with calculation, and a starry-eyed yet ruthless lust for fame perfectly. There’s nothing pathetic about her Roxie Hart, and her solo number/monologue “Roxie” is riveting and hilarious.

Terra C. MacLeod’s Velma is tough and funny during her solos–including the opening number–but her best moments come during her interactions with her rival, Roxie, and her duet with Mama, “Class.” But being that one of her biggest solo songs is her pleading with Roxie to join her in a duo act,  with “I Can’t Do It Alone,” it’s fitting that she hits her highpoint with the show’s finale routines with Roxie, “Nowadays” and “Hot Honey Rag.”

Seeing the musical made me go back and re-watch the movie, just to make sure I wasn’t wrong with my original assessment. I maintain I wasn’t. The original musical is just so much more fun, and I’d recommend this current production over watching the movie any day.