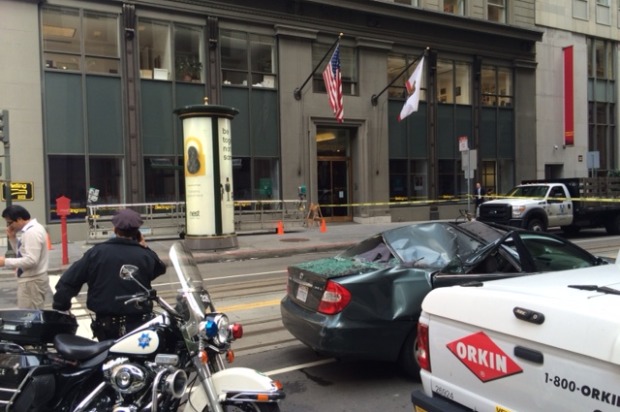 The intersection of Montgomery and California streets in San Francisco’s Financial District reopened this afternoon after a man fell from the roof of an 11-story building this morning.

Fire crews responded at 10:03 a.m. to reports that a worker had fallen from a building at 400 Montgomery St. onto a moving car, according to the fire department and a preliminary investigation by the California Division of Occupational Safety and Health. The window washer was taken to the hospital with serious injuries, fire officials said.

Cal/OSHA spokeswoman Julia Bernstein said the man suffered a broken arm and injuries to his side.

The man, an employee of Redwood City-based Century Window Cleaning, was preparing to wash windows on the building when he fell, according to witnesses at the scene and Cal/OSHA.

The federal Occupational Safety and Health Administration cited the company for safety violations four times in 2008, including one serious violation that resulted in a $6,740 penalty, according to the agency’s website. The case was eventually settled, and the penalty was reduced to $2,720, Bernstein said.

Bianca Bahman, 31, a pre-med student at San Francisco State University, was walking to the gym when she saw the man’s shadow as he was falling and then watched him land on a Toyota Camry that was approaching the intersection.

The car’s roof caved in and there was blood everywhere, Bahman said. She ran to the man to see if he was okay and said there was blood coming from his ears. He was gasping for breath as he rolled off the car and onto the ground, she said.

A coworker remained on the roof and Bahman said she could hear him screaming.

Sam Hartwell, 56, was crossing the street when he saw a blue streak through the air and then heard a loud impact and shattering glass. About 20 people rushed toward the man and others called 911 and directed traffic, Hartwell said.

A nurse who was walking past stopped and instructed people to put clothing around his head and body, saying he was in shock and needed to be kept warm, Hartwell said.

Initially, Hartwell said he thought it was a suicide but when he realized the man was a worker, assumed he had fallen by mistake. Bernstein said Cal/OSHA is investigating the incident and there is no information at this time as to why the man fell.

San Francisco police Sgt. Danielle Newman described the window washer as a middle-aged man and said the driver of the Camry was unharmed.