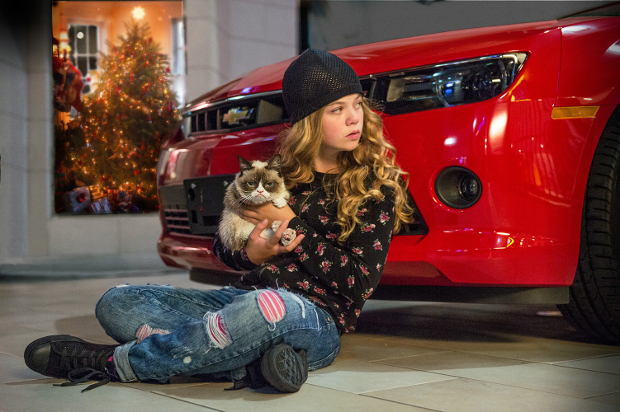 Whether you celebrate with your nuclear family or friends (which, according to Spaced, is the family of the 21st century) or if you’re just listening to Bob Seger in a dark room while eating gravy, be sure to have a wonderful Thanksgiving! If you refuse to have a wonderful Thanksgiving, maybe you can think of the first Thanksgiving as the Gotham of American history, as it was just the prequel to out and out genocide. And if you are going to be part of the materialistic horde on Black Friday, America, this is you:

Monday, November 24
Gotham (8pm, FOX, fall season finale)
The Batman-before-Batman show would be far and away the best new show this fall if it was just Donal Logue glowering and chewing up the scenery every week, although Robin Lord Taylor definitely deserves some shine for his performance as young Penguin. The show is still trying to grapple with modulating campiness vs noir and the results by-large don’t feel fun at this point in time. Assuming the show doesn’t stage a midseason rally or gets renewed for a second season and becomes good, can The CW just legit adapt Gotham Central? In the meantime, take two Terriers and a Southland and call me in the new year.

Tuesday, November 25
Dancing with the Stars (9pm, ABC, season finale)
Despite injuring his back last week and pulling his groin performing his trademark Carlton dance, Alfonso Ribeiro made it to the finals! He’ll be going against Pretty Little Liars star Janel Parrish, YouTube person Bethany Mota, and Duck Dynasty cast member Sadie Robertson for the big one this season. If Alfonso Ribeiro loses, 90’s kids won’t riot, they will just post listicles on Buzzfeed broadcasting their disappointment via Fresh Prince of Bel Air gifs.

The Sisterhood: Becoming Nuns (10pm, Lifetime, series premiere)
If you ever want to see television-friendly young women grapple with if they want to dedicate their lives to becoming nuns, boy does Lifetime have a show for you. It also might help explain those funny feelings you had around nuns going to Catholic school. This feels like the mutation of the recent spate of Amish-related programming the past couple of years combined with those documentaries they would air on PBS or Discovery Channel or History that embed in boot camp with Marines or something.

Wednesday, November 26
The Whale: Revenge from the Deep (9pm, Animal Planet)
Martin “President Barlet” Sheen stars in Animal Planet’s first scripted movie (and not one of those fake documentaries about mermaids or giant sharks meant to look real but are actually fake) chronicling the sinking of whaling sink The Essex, which in turn would become the inspiration for Moby Dick. So underachieving high school kids, if you want to get out of reading Moby Dick in school, all you need to do is build a time machine to prevent the sinking of The Essex, so the book would never have gotten written. But in doing so, so would have invented viable time travel, so maybe you aren’t as underachieving as you thought.

Thursday, November 27
The 88th Annual Macy’s Thanksgiving Day Parade (9am, NBC)
Start your Thanksgiving morning off right by paying tribute to our American capitalists idols in float form in New York City, while our high priests Matt Lauer, Al Roker and Savannah Guthrie guide us through the ceremony.

Sunday Night Football: Seattle Seahawks at San Francisco 49ers (5:30pm, NBC)
The 49ers take on the Seattle Seahawks during the tradition of post-dinner footballing on television, which may help drown out your Info Wars believing relatives, talking about chem trails during Thanksgiving dinner.

Friday, November 28
CMT Crossroads: Bob Seger and Jason Aldean (10pm, CMT)
Speaking of Bob Seger, he will be performing along with Jason Aldean on Friday night, Mr. Seger can work on his night moves, while I work on some night gravy for the day before.

Saturday, November 29
Grumpy Cat’s Worst Christmas Ever (8pm, Lifetime)
Internet commodity/brand representative Grumpy Cat stars in its own Christmas movie, consisting of the threadbare-st of threadbare Christmas movie tropes but in a self-aware, tongue-in-cheek fashion in order to create mythos around Grumpy Cat’s perpetual grumpiness. (And maybe move some Purina Friskies too?) Because nobody in the room is acknowledging that Grumpy Cat is just forever hopped up on sedatives and suffers from feline dwarfism. Sensitive guy crush object/front-runner in everybody’s hypothetical live-action Daria movie Aubrey Plaza voices the titular cat, and described the film on Jimmy Kimmel Live as “the most insane thing I’ve ever seen.” Whoever is head of programming at Lifetime must be an evil genius, because Lifetime is on a roll right now. Not a great roll, but a roll nonetheless.

Sunday, November 30
The Walking Dead (9pm, AMC, Fall season finale)
I’m not sure I would have believed you if you told me this time last year that Sleepy Hollow would become stagnant, and Walking Dead and Agents of SHIELD would be good. This is some timeline we’re living in, folks. The cultural phenomena of The Walking Dead has always brushed up against how middling the show can be (Todd Vanderwerff described the season three finale as a ‘lukewarm shower’ and that’s how I’ve been describing the show to people ever since), but oh boy, it took them four years, but this season of the show has been some kind of barn burner, and one of the few shows I go out of my way to watch live. I have friends who are just starting Walking Dead, and I am just debating telling them start with the middle of last season, just so they can get to this chewy goodness of season five sooner.