2014 American Music Awards An En Vogue Christmas Country Buck$ Duck Dynasty Grey's Anatomy Hell on Wheels Hello Ladies: The Movie How To Get Away With Murder Lilyhammer Scandal Shipping Wars State of Affairs The Real Housewives of Beverly Hills by Paolo Sambrano | November 17, 2014 8:47 am | in Culture | 0 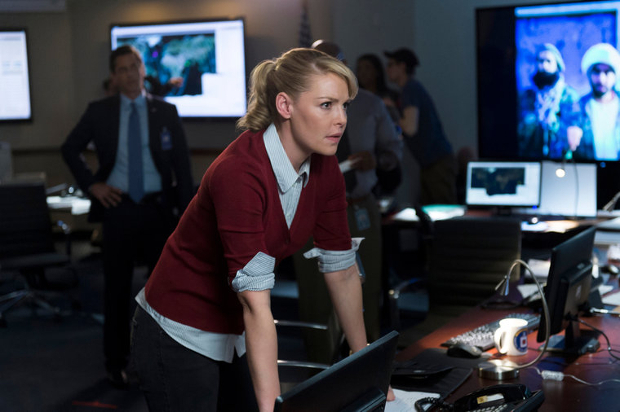 In the wake of cancellation news this week (good night sweet princes Franklin and Bash, network TV isn’t ready for an Asian male romantic lead, Selfie, somebody call The Americans, The Millers is over) we can only ask ourselves:

Monday, November 17
State of Affairs (10pm, NBC, series premiere)
One can’t read or write about Katherine Heigl without the word ‘difficult’ appearing. Regardless, the former Grey’s Anatomy cast member stars in what appears to be a Homeland for network TV. Heigl is a CIA analyst who prepares the President’s daily security briefing. Also is trying to figure out the murder of her fiance. No word if Katherine Heigl is going to try and have it all.

Tuesday, November 18
The Real Housewives of Beverly Hills (9pm, Bravo, season premiere)
Soap opera star Lisa Rinna is joining the cast of the Beverly Hills iteration of the human meat industrial complex parade. Which doesn’t super feel in “the spirit” of whatever the Real Housewives franchise “is” (as an outsider), but if that means Harry Hamlin will be on TV more, it can’t be too bad, right? One can think of this as the spiritual successor to the 2010 TV Land reality show Harry Loves Lisa.

Wednesday, November 19
Duck Dynasty (9pm, A&E, season premiere)
In lieu of actually trying to write about the cultural phenomena of Duck Dynasty, here’s a clip from the laughable and unfortunate religious film God’s Not Dead featuring cameos from Willie and Korie Robertson.

Country Buck$ (10pm, A&E, series premiere)
Country Buck$ reads like the alternate universe version of a Duck Dynasty, a facsimile attempt to give the people what they want, which I guess are country-types who have fuck-you money who star in overwrought summer camp talent show sketches that gets passed off as television. Which I’m sure somebody way smarter than I am has already postulated is a reflection of where America is right now.

Party Down South (9pm, CMT, season premiere)
Alcohol Poisoning Watch: The TV Show is back! Remember, if a person is choking on their own vomit, turn them on their side.

Friday, November 21
Lilyhammer (12:01am, Netflix, season premiere)
While not having the shine that a House of Cards or Orange is the New Black has, Lilyhammer will always have the distinction of being the first piece of original content to be offered up on Netflix. The cross-cultural Norwegian mob dramedy starring Sopranos (and E Street Band member) Steven Van Zandt returns for a third season on Netflix.

Saturday, November 22
An En Vogue Christmas (8pm, Lifetime)
Coming off last week’s disaster that was Lifetime’s Aaliyah biopic (by the way, Flavorwire’s Pilot Viruet’s take-down of the movie column is magic) now Lifetime has 90’s R&B group En Vogue celebrating Christmas with us, with David Alan Grier in tow. How does En Vogue celebrate Christmas? By staging a benefit concert to save the night club where they first got their start. God bless us, everyone!

Hell on Wheels (9pm, AMC, season finale)
I maintain that AMC is the thirstiest network on television. (splitting up Breaking Bad/Mad Men final seasons, renewing Better Call Saul for a second season before its premiere, eventual Walking Dead spin-off) People seem to forget about its western drama Hell on Wheels, which though on Saturday nights remains a good earner for the network. The western drama starring Anson Mount and Colm Meaney has one more season left in it. (in true AMC fashion, the first batch of episodes go up this summer, and the remainder won’t air until 2016.)

Hello Ladies: The Movie (10pm, HBO)
Canceled after one season, Stephen Merchant’s cringe comedy was too cringe-y for its own good. But fret not, all like forty of you who were invested in a 6′ 7″ English man going through the path of most resistance to not get laid in LA, a Hello Ladies movie will revisit the characters one more time and tie up loose ends.

Sunday, November 23
2014 American Music Awards (8pm, ABC)
All I can really tell you about the American Music Awards this year is that Taylor Swift will definitely be performing her new single Blank Space off of 1989. Anybody want to take any over/under action that at the end of her performance she tears up a photo of Spotify a la Sinead O’Connor (either the AMAs or Sinead O’Connor must be lying about trying to get her to perform alongside Pope Francis).