Weekend Watch: Fury, The Best Of Me, The Book Of Life, St. Vincent

Brad Pitt is back fighting Nazis in another World War II movie that is just as preposterous as Inglourious Basterds, but not nearly as fun. Not that war is fun, of course. War is hell! And Fury spends two-plus hours illustrating just that, again and again and again.

Pitt plays a U.S. Army sergeant commanding a sherman tank nicknamed Fury. The four men in his crew include three who’ve been through plenty of battles with him, and one fresh-faced Army typist (Logan Lerman) assigned to be the assistant driver after their original driver loses his life (and half his face). It’s nearing the end of the war, and Hitler has gone full throttle into battle, and the war-weary American troops are forging ahead, town by town, across Germany.

Of course the wet-behind-the-ears recruit has to learn to suck it up, shoot them Nazis, and BECOME A MAN through the course of the film, and there’s no shortage of opportunity for him to do just that. He goes from pacifist to trigger happy pretty quickly, and even gets to spend an afternoon with a lovely, smalltown Fraulein. (Who, incidentally, is seen in a preposterously short and anachronistic dress; it’s almost as anachronistic as Brad Pitt’s naked pecs, also on view during the same scene).

But is there a purpose to this movie, aside from showing us the hell of war, again, some more? Not really. It’s intensely graphic, often thrilling, and filled with impressive explosions and headshots. It’s designed to make you cheer at the fury of battle. It’s a World War II movie for the gamer generation. 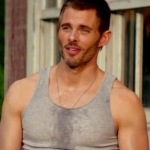 The Best of Me – Everywhere 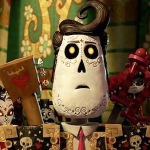 The Book of Life – Everywhere

Animated movie influenced by the Mexican Day of the Dead. And if that sounds familiar, maybe it’s because Pixar is also working on an animated movie inspired by Dia de los Muertos.

So, this one is PURELY a coincidence, right?

Not a movie about the poet, the singer/songwriter, or any of the numerous saints. No, this comedy is centered on a cranky old man, played by Bill Murray, who is hired by a single-mom neighbor (Melissa McCarthy) to take care of her 12-year-old son. When did Bill Murray turn into Walter Matthau? (NOT THAT I’M COMPLAINING.)