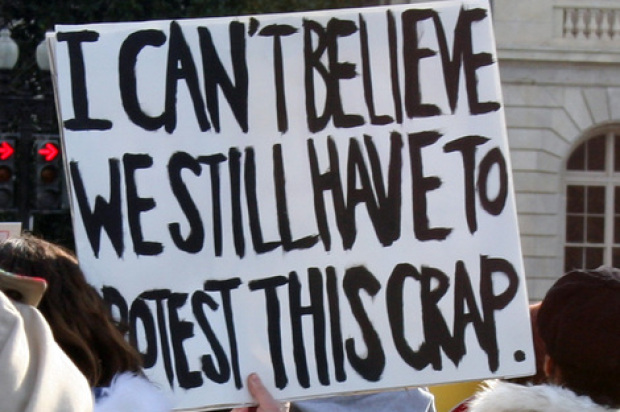 A group of protesters gathered on the steps in front of the California Public Utilities Commission’s building in San Francisco this morning demanding the removal of commission president Michael Peevey.

The call for Peevey’s ousting comes just weeks after San Mateo County politicians blasted the CPUC and called upon state Attorney General Kamala Harris to conduct an investigation into the commission’s allegedly unlawful relationship with PG&E in the wake of the 2010 San Bruno explosion.

Protesters assembled today on Van Ness Avenue holding signs with slogans such as “#flushPeevey” and “Peevey Out Now” prior to the commission’s meeting.

Peevey, the former president of Edison International and its subsidiary Southern California Edison, was appointed to the position of CPUC president in 2002. His current term expires at the end of this year and he could be reappointed to a third six-year term.

Zeltzer said Peevey hasn’t been looking out for the well-being and needs of Californians and instead “colluded” with privately-owned utility companies.

Zeltzer said he wants to see California create a public utility that has the interest of Californians at its core, rather than private utilities, which he said put profits above consumers’ health and safety.

The call for action comes in the wake of PG&E’s firing of three employees in September for email conversations with CPUC officials that discussed assigning administrative law judges to rate-setting cases who would be more sympathetic to PG&E’s case.

In July, San Bruno city officials obtained emails between the CPUC and PG&E that showed CPUC officials advised PG&E on how to handle legal issues and potential fines stemming from the gas pipeline explosion.

Peevey’s chief of staff, Carol Brown, resigned for her part in the email exchanges.

However, CPUC Commissioner Mike Florio, who communicated with PG&E over the judge assignment, remains in his post.

PG&E has said the utility took responsibility for the misconduct and expects a fine.

Hill, Mullin and Ruane publicly signed a letter to Harris calling for an investigation and delivered it to her office in the California State Building in San Francisco last month.

They expressed a loss of confidence in the CPUC and its president, which they said they had communicated to Gov. Jerry Brown.

“The emails show a blatant disregard for the law by PUC commissioners and management,” Hill said.

A spokesman from the attorney general’s office said Harris received the letter from the Peninsula politicians, has read it and that their office is in the process of reviewing it, but declined to comment on the allegations today.

Protesters today also expressed anger at PG&E’s rate increases, as well as concerns over potential dangers of smart meters, saying that both are a result of CPUC’s lack of oversight of the utility company.