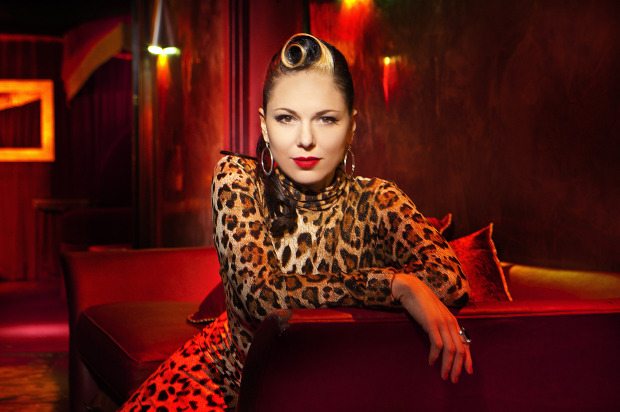 Imelda May is a fresh face to US listeners. Her showstopping performance at August’s Outside Lands helped rouse angry Chvrches fans, many of whom had seemingly only bought tickets to the festival to see them. Chvrches cancelled their set and May assumed the responsibility of anchoring the early afternoon Sunday slot they would’ve occupied in addition to her own. The 40 year old songstress was absolutely brilliant. Likewise her studio work has earned her some key fans and colleagues.

Jools Holland, the iconic bandleader and TV host, has played a pivotal role in May’s meteoric rise. It was Holland who booked May as a supporting act on his tour and featured her as a guest on his Later… With Jools Holland program. Both his acclaimed show and his warmth inspired May to create a show of her own – the Imelda May show. “It’s a music show that’s a total rip-off of Jools Holland,” May explains. “I actually called Jools – he’s a friend of mine – and told him about the show and he was very supportive. He gave his blessing and was the first guest on the show. It’s such a good format.”

May hopes to attract more international guests on her program but for now, she says it’s a great platform to showcase Irish musician who seek exposure through means outside of other television music programs, of which May is critical. What’s worked for her has been life experiences – gaining wisdom on the road through trial and error, putting in long hours of songwriting and working phrases until they’re the perfect lilt. It’s paid in dividends and, May believes, only enhances the experience of her success.

“I put my heart and soul into this and great things have happened. It’s gone well. I’d like to tend to grow on each album and it’s been great for me to do so with some experiences under my belt,” May says.

May is also one of the few touring artists who seeks balance in her family and work life and may very well achieve it. Her husband, guitarist Darrel Higham, also joins her on the road, along with her young daughter. The current debate of being able to have it all isn’t one that weighs heavily on May because, she says, nobody can have it all no matter their path and that’s okay. “If you’re a stay-at-home mom you’re sacrificing your home time, if you work you’re sacrificing some of that, and if you try to do both it’s a sacrifice of both,” May says. “I want things to be as normal as can be for my family life and this is what’s normal. It’s been so wonderful to share so much with my daughter, and to show her that the world is her oyster. Isn’t it amazing that, at that young of an age, anything is possible, that anything can happen?”

It is that spirit that has kept May on the road and inspired. She’s excited to return to SF with her whole band in tow, especially given previous incidents. “One time we accidentally left our drummer by the Golden Gate Bridge. He came out of a bathroom just as our bus was pulling away and still had his cellphone on the bus,” May says with a laugh. “Luckily we were able to go back and get him!”