Passenger Hit With Hammer by Uber Driver Speaks out About Recovery 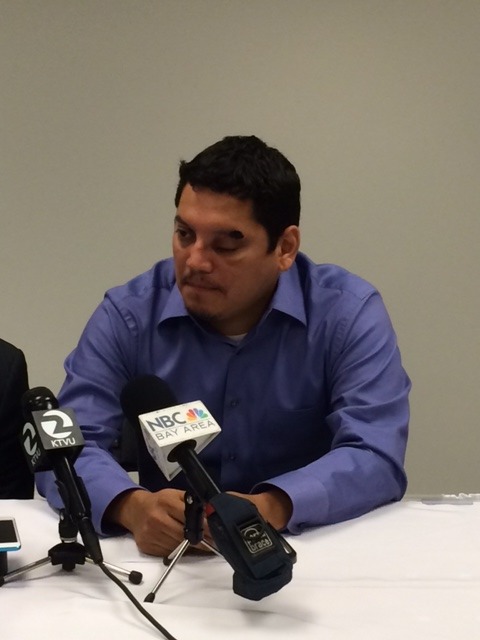 A passenger who was attacked with a hammer allegedly by his Uber driver in San Francisco last month spoke publicly today about the potentially permanent damage caused to his vision in the attack and how he hopes to prevent similar attacks from happening to other passengers.

San Francisco resident Roberto Chicas, 35, appeared today with his eye swollen shut and was joined by his attorney Harry Stern.

Chicas said waking up in the intensive care unit of a hospital after being knocked out by a blow to the head with a hammer was a jarring experience and that he hopes no one will have to experience similar situations when trying to get home from a night out on the town.

“To wake up and have doctors hovering over you,” Chicas said, “was probably one of the scariest things that I’ve ever experienced.”

Chicas, who works as a bartender at numerous establishments in the city, is unable to work as a result of his injury. He said he is happy to be alive, but that his doctors said he may lose his eye if it doesn’t heal properly.

He said he is concerned that he won’t be able to see out of his left eye and is taking legal action so that no one else is victimized.

Gascon said that Karajah does not appear to have a criminal record, but because he was working for Uber at the time, the company could be held liable.

Gascon said that Karajah picked up the three passengers around 2 a.m. on Sept. 22 in his UberX vehicle as the three friends were leaving a bar.

Stern, Chicas’ attorney, said Chicas and his friends had been out in the area of Mission and Second streets and that the first stop was supposed to be in the Lower Haight neighborhood, but for some reason, Karajah got on the highway and headed south.

When the passengers questioned Karajah about his route, a dispute resulted and the driver asked the two men and the woman to get out of his car near the intersection of Alemany Boulevard and Ellsworth Street, just off of Interstate Highway 280, Gascon said.

Stern said the two men got out of the vehicle and when the woman checked the seat to make sure they didn’t leave anything behind, Karajah brandished the hammer at her.

Karajah then turned toward Chicas and struck him in the face with the hammer.

Following the attack, Karajah fled the area before being arrested, Gascon said.

Karajah pleaded not guilty to assault with a deadly weapon and battery causing serious bodily injury. He is out on $125,000 bail, Gascon said.

Stern said that if this incident involved a traditional taxi service, he surmised that there wouldn’t be a lack of acceptance of responsibility by the company.

He said Uber is trying to avoid responsibility by characterizing their drivers as contractors, but he said under the law, Uber is responsible for the actions of its drivers.

Stern said the attack was unprovoked and that Uber shouldn’t have hired the driver.

“This is someone who snapped, who is erratic,” Stern said.

The attorney also said that following the ride, Chicas received a receipt which included a $1 safety fee.

“They are guaranteeing, warranting that this is safe passage, and not only that, they are charging for it,” Stern said.

He said the two other passengers are also filing claims against the driver and the service for false imprisonment and assault.

Stern said that Uber, as a provider of transportation, is responsible and liable for the acts of its driver.

Uber states that all drivers are “screened through a rigorous process we’ve developed using industry-leading standards,” which they say includes a criminal background screening in the U.S. with county, federal and multi-state checks that “go back as far as the law allows.”