Hardly Strictly Bluegrass 2014: Our Picks for Your Free Weekend of Music 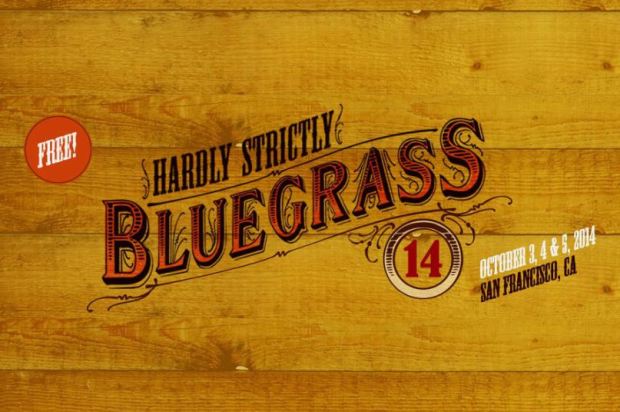 Hardly Strictly Bluegrass is celebrating its 15th year of free music in Golden Gate Park. You may already be there with your middle schooler watching the Aquabats! or you’re stuck at work, awaiting a jam-packed Saturday and Sunday. Either way, we’ve narrowed down the many stages and artists to bring you our must-see picks. Sadly, we haven’t whittled down the crowd, which is expected to hit 750,000 people cumulatively. If you’re feeling agoraphobic or don’t want to deal with a shitload of people, HSB’s got a fancy webcast so you can set up camp at home and begin a fairly comfortable weekend-long couch tour.

Hurray for the Riff Raff: New Orleans-based Alynda Lee Segarra and co bring their folksy traveling mix of Americana and delta blues gold to the Arrow Stage at 2:35pm. Riding high on the release of breakout album Small Town Heroes, Hurray for the Riff Raff have been all over the country and along the late night circuit, playing in SF just a month and a half ago. Hardly Strictly provides the perfect backdrop to enjoy the slow shuffle of “Good Time Blues (An Outlaw’s Lament)” or the swinging soul of “Just a Heart”.

Sharon Van Etten: Singer-songwriter Sharon Van Etten is a jewel to behold on the singer-songwriter scene, having vaulted from quietly beautiful chanteuse to crooning powerhouse in the time it’s taken to establish Pitchfork Music Festival as a legitimate festival season contender. Van Etten played the inaugural Chicago festival in 2010, released another album, wowed crowds at Outside Lands in 2012 and all over the country, and returned in 2014 to claim her crown as one of the best performers of the weekend. Van Etten will hopefully do the same thing at Hardly Strictly, winning over fans left and right with brute confidence and a haunting voice whose lyrics transcend their format.

Ryan Adams: Singer-songwriter Ryan Adams has a lot of rage. It’s what transformed his impeccable cover of Danzig’s “Mother” from tribute to wholly owned song, Adams’ warning of instability as frenetic as his alleged temper. It’s difficult to consistently highlight a supposedly negative quality in an artist but it is the sheer passion that exudes from Adams’ guitar work and gripping vocals that sets him above similar artist whose status at the opposite end of the specturm puts them in trite territory. In release an eponymous LP after nearly a decade and a half of solo work, (Adams’ former band, Whiskeytown, fizzled shortly after critical acclaim) it’s clear that he’s harnessed his emotive identity towards creative good.

Deltron 3030 with the 3030 Orchestra: There is no better way to experience the trippy dystopia of Deltron 3030 than with a live orchestra fleshing out the rhymes of Del the Funky Homosapien and beats of Dan the Automator like a John Williams film score. The two are essentially entwined, the swell of one conjuring the other. An SFAppeal favorite, when we spoke with Del earlier this year, he’d mentioned that the combination of live, analog players alongside Dan’s production and his rhymes were something like a dream come true, though the dour lyrical content of Deltron 3030 makes it almost feel like a gripping nightmare. A daytime set in Golden Gate Park will make them work for it but, in the end, it’s going to be worth it.

Mavis Staples: Soul legend Mavis Staples has sung duets with Arcade Fire’s Win Butler at Outside Lands, brought herself closer to family as a member of the Staples Sisters, and has received countless (long overdue) accolades in the years since HSB first began opening Golden Gate Park back up to the musical glory Staples had undoubtedly experienced in the 60s. Having Mavis Staples play a dusk set in such a revered space is an intrinsically Hardly Strictly move that proves good music shouldn’t be bound by high ticket prices and ridiculous conditions.

Social Distortion: SoCal punks Social Distortion have been working on a new album since early last year and though they’ve cleaned up their act for the better, frontman Mike Ness is still drawn to the simple process of setting pen to paper and pick to guitar. Fans may very well hear new material as well as a more acoustic set given Social D’s surroundings. The quartet certainly know how to cater to an audience and consistently play the types of high energy shows that reinvigorate the band as well as its long-standing, dedicated fans. New to Social Distortion? They’re happy to give you a primer and ease into things with stellar covers like the quintessential “Ring of Fire”.

The Lone Bellow: SFAppeal favorites the Lone Bellow may have just played the Fillmore, but their expansive urban Americana is difficult to constrain in a closed venue. The Lone Bellow aren’t strangers to Golden Gate Park, either. They’ve played Outside Lands before and are big fans of the area’s natural beauty. Combined with raw harmonies and the type of passionate stage show that his literally made fans drop to their knees alongside frontman Zach Williams as the music reached a fever pitch. Imagine hundreds of thousands of fans filling Hellman Hollow dancing and feeling all that goes into the Lone Bellow’s robust Americana vignettes and you’ve got a good idea of what Sunday afternoon is set to look like.

Sun Kil Moon: Mellow hometown heroes Sun Kil Moon may be exactly what you need to ease into the final day of Hardly Strictly or to wind down from an epic Lone Bellow set. Fronted by Mark Kozelek, the singer and his backing band are the ultimate in unpretentious act. They take to sitting, tapping their feet, and simply singing mellow melodies that long predate Bon Iver and provide far more endurance given Kozelek’s deep, distinct vocals. 2014’s Benji further cements their legacy as a thoughtful band verging on the meta. Settle in and slow things down.

Jason Isbell: Like Ryan Adams, Jason Isbell came from a highly successful band. As a guitarist with Drive-By Truckers, Isbell paid his dues and skirted danger in ways that still inform his songs to this day. Though he’s in a far better headspace, those drunken nights of carousing and carelessness are what makes Isbell’s tender laments and country stomp as heartfelt as an unplanned eulogy after spending years with the deceased only to find them gone. There’s plenty of uplifting notes that Isbell may leave you on but it is the threat of the tragic that makes his sets all the more a must-see.