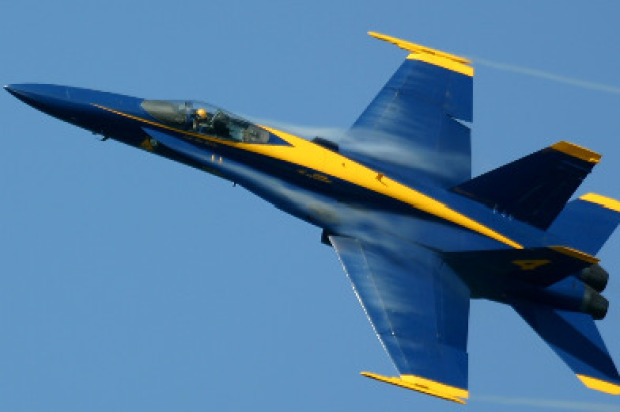 The familiar rush of fighter jets through San Francisco skies is returning this week for the city’s annual Fleet Week, which was canceled by federal budget fights last year.

The entire Fleet Week schedule of events last October was eventually canceled because of the government shutdown.

But this year Fleet Week is back, with a full slate of events kicking off this afternoon, culminating in the return of the Blue Angels demonstration this weekend.

The Blue Angels will arrive Thursday and hold a rehearsal Friday before the air show at 12:30 p.m. on Saturday, organizers said. They will hold a second air show on Sunday afternoon before the week’s events wrap up with a performance by the Northern California-based rock group Mustache Harbor.

Mustache Harbor is just one of several bands who will be playing on and around Pier 39 throughout the weekend, with performances scheduled by the U.S. Marine Corps Band, the Air Force Rock Band, the Destroyers from the Navy Band Southwest, Diablo Road and DJ Scotty Fox.

The main festivities will kick off at 11 a.m. Friday, with the Parade of Ships arriving, passing under the Golden Gate Bridge and mooring in San Francisco Bay.

No other boats will be permitted to travel along the San Francisco waterfront from the Golden Gate Bridge to south of the Ferry Building during the parade, according to the U.S. Coast Guard.

While most of the biggest events are slated for this weekend, Fleet Week begins this afternoon with a “Bark in the Park” event where dogs trained in bomb detection, tracking, and apprehending suspects will show off their unique skills.

The K-9 demonstration will start at 3 p.m. in San Francisco’s Jefferson Square Park featuring dogs from the U.S. Marine Corps, San Francisco police and fire departments, and other groups.

A full schedule of events is available at www.fleetweek.us.