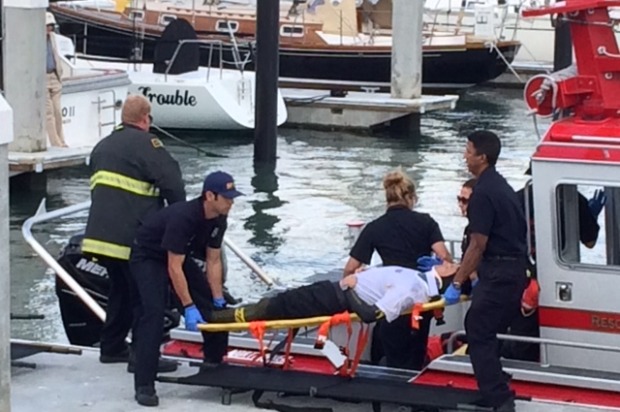 The San Francisco Fire Department conducted a simulated training drill this morning to practice responding to a multi-casualty ferry disaster in the Bay.

Shortly after 10 a.m. today, a blue and white-colored ferry operated by the Golden Gate Bridge, Highway and Transportation District was drifting in the Bay waters about a mile north of San Francisco’s Marina Green emitting a cloud of smoke from its stern to simulate a fire.

The disabled passenger ferryboat, M.V. Mendocino, was drifting with the current in the Bay while the rescue operation was underway.

San Francisco fire Battalion Chief Rudy Castellanos said the high-speed ferry had its engine turned off in the waters between Alcatraz Island and San Francisco and was drifting west toward the Golden Gate Bridge.

About 40 volunteer victims wearing wetsuits, including a number of students from City College of San Francisco, jumped into the water from the ferry.

The victims were rescued from the water and taken to shore by lifeguards on jet skis, police and fire vessels, as well as a Coast Guard vessel.

The victims with simulated serious injuries were removed from the rescue boats on stretchers while those assigned to be without injuries walked up the dock to the shore.

A red Coast Guard helicopter dispatched to assist with the water rescue hovered above the water until all victims were brought to safety.

Following the drill, the volunteers and rescue personnel from the various agencies gathered together to discuss some of the unforeseen issues that arose during the drill.

Some rescue personnel highlighted a degree of confusion regarding the number of victims transported from the water, while others said they weren’t sure if the police boat was picking up on the drill’s radio communications.

Other rescue personnel said there was confusion about which rescue boats should bring which victims. Others said they weren’t sure whether the ferry was drifting out to sea or was motoring away during the drill.

The main complaint was a need for additional units at the scene. Rescue personnel said there were too few people available to bring the stretchers up from the docks when they arrived by rescue boat.

Castellanos said today was a rare opportunity to practice rescue operations with all of the agencies who would likely be called to the scene during a real disaster and that it helps the fire department figure out where to allocate more resources in the future.

He said today’s training is especially important as the Bay waters experience an increase in recreational and commercial vessels.

While today’s drill took place on San Francisco’s northern waterfront, Castellanos said he hopes the next drill will incorporate rescue personnel who guard the city’s eastern and western shorelines.

The drill comes just three days after the Peralta, a ferry operated by Blue and Gold Fleet, struck a piling while backing out of the terminal at San Francisco’s Pier 41.

The crash occurred at 5:45 p.m. Sunday and resulted in 10 passengers with minor injuries who were transported to the hospital for evaluation.

The Peralta was temporarily taken out of service and Coast Guard investigators and inspectors boarded the vessel.