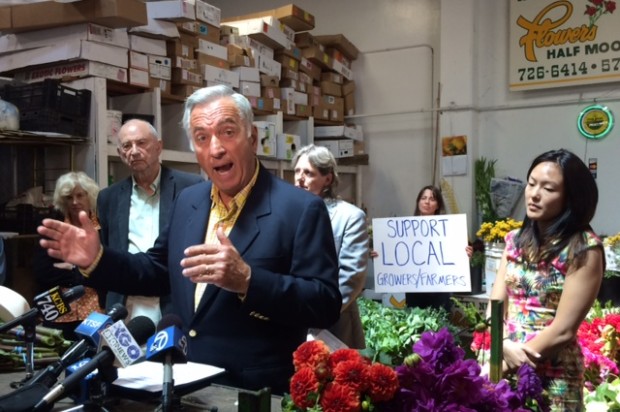 Amid concerns that the San Francisco Flower Mart in the city’s South of Market neighborhood could be dismantled or relocated by a new property owner in favor of high-rise development, a citizens’ initiative was announced today that would preserve the current zoning of the site.

Last month, the San Francisco Flower Growers Association voted to sell the property they own that makes up a portion of the Flower Mart, located on Sixth Street between Brannan and Bryant streets, to Kilroy Realty Corporation for roughly $25 million.

A lawsuit filed by flower vendor David Repetto, however, is pending. Repetto said negotiations for the sale were made “behind closed doors” and didn’t represent shareholders.

At a community meeting at the Flower Mart today, florists and their supporters expressed concern that if the market is sold, their leases may not be renewed once they expired in December and they could be pushed out to make room for tech companies.

The citizens’ initiative, titled the San Francisco Flower Mart Protection Act, will need 9,703 signatures to get a spot on the November 2015 ballot, according to Aaron Peskin, a former member of the city’s Board of Supervisors.

The initiative will preserve the existing zoning of the market, Peskin said.

Peskin said he hopes Kilroy begins talking with vendors long before the initiative reaches the ballot.

Kilroy Realty Corporation’s senior vice president of development and land planning Mike Grisso said today, “We have promised to keep the Flower Mart on-site and that is exactly what we are going to do.”

Grisso said that once Kilroy officially acquires the site from the San Francisco Flower Growers Association, which could be sometime in the next couple months, Kilroy plans to “create a modern facility to be enjoyed by growers, tenants, buyers, and visitors for many decades to come.”

He said the realty company would work with all adjacent owners, existing tenants, and the city to preserve the Flower Mart at its current location.

While the transaction is being processed however, leaseholders remain uncertain about the future of the property and whether they will be allowed to renew their leases, as none of Kilroy’s promises are in writing.

Kathleen Dooley, a florist and a commissioner in the city’s Office of Small Business, said the citizens’ initiative was filed under her name because she felt she had to fight for the roughly 80,000 jobs that the Flower Mart supports.

“I did it out of frustration,” Dooley said.

The jobs supported by the Flower Mart include a variety of professions ranging from growers in Northern California and around the world to truck drivers, vendors and florists in the Bay Area.

Patricia Valencia, who has been in the San Francisco Flower Mart since 2008,is one of the vendors who have been in the flower industry for decades. She is the proud owner of Sunshine International, which specializes in bringing Ecuadorian roses, as well as a variety of flowers from Columbia, to the San Francisco Bay Area.

Valencia said her business is doing very well, but she fears that to the property developers, she and other vendors at the Flower Mart may look “like antiques” in comparison to the shiny new tech companies that would love the property due to its close proximity to the highway on-ramps and the Transbay Terminal.

She said if the Flower Mart closed it would be “catastrophic” for her business.

Valenica said she would, however, love to see the Flower Mart redesigned like the Ferry Building with pedestrian access, coffee shops and with a more bright and inviting atmosphere, as long as all the vendors can remain on the property.

Assemblyman Tom Ammiano joined florists and vendors in the Flower Mart today to express his solidarity with the workers and his respect for the history of the market.

Both Mayor Ed Lee and former San Francisco Mayor Art Agnos have expressed their support for the Flower Mart. Lee said previously that developers have long been competing for the ability to develop the site, but that all developers interested in the property agreed to retain the Flower Mart.

Agnos said not only is the market a place of historical importance, but it symbolizes all the hard-working non-tech workers that made this city what it is today.

The citizens’ initiative will give vendors leverage if Kilroy chooses not to incorporate the Flower Mart into their development plans, Agnos said today.

The Flower Mart supporters will begin collecting signatures for the initiative while they wait for Kilroy to finalize the purchase of the property and reveal their development plans to the community.